And we’re back - until the next adventure!

Two days back in the UK: that’s how long it’s taken me to get around to writing this. We arrived home eventually at about 2.00am on Tuesday morning. So, what do you do on such a day when you finally get up? You wash a million things out of your suitcase! And then I went into Manchester for my Italian class. If our teacher was going to make it after getting home at 2.00 in the morning and then going to teach a bunch of high school students before coming to our adult class, then so could we. Besides, those of us who had been to Sicily wanted to tell those who had stayed at home what a treat they had missed!

Our final day in Sicily, Monday, was not to be wasted. Suitcases loaded into the minibus, we set off for the final surprise of our trip. The extras on this trip have been quite magnificent. 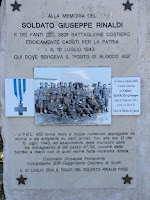 This one turned out to be a farm visit, specifically Masseria Posto di Blocco 452. The farm is just next to a crossroads where checkpoint 452 was situated in the Second World War. On July 10th 1943 some twenty Italian soldiers fought there against American paratroopers and, greatly outnumbered, inevitably all perished. The son of one of the soldiers, Soldato Giuseppe Rinaldi, found out where his father had died and had a monument erected there on July 10th 2014. And the farm keeps the name of the checkpoint. 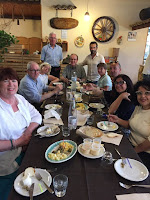 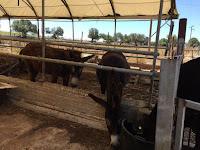 The farm is all organic and has around 25 milking cows to make cheese - ricotta and the like - and a variety of other animals just for show. They used to have more cattle and sold milk as well but for various reasons it was not economical and now they make cheese, which they sell largely to restaurants, and run a bit of tourism with farm visits and fine food-tasting sessions. And so we got to see how their cheese is produced and sat down to eat yet more Sicilian food. 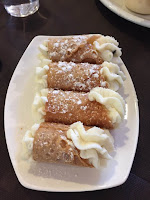 Their canneloni were splendid, and I am not a great canneloni fan as a rule.

It’s a wonder any of us fit in our clothes now.

After lunch we went to Caltagirone, but first we visited a quite baroque cemetery on the outskirts on the city. 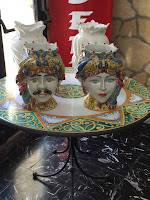 In Caltagirone itself we admired the pottery and discovered the legend of the “Teste de Moro”, the pairs of ceramic planters made in the shape of a blackamoor’s head and a white woman’s head. 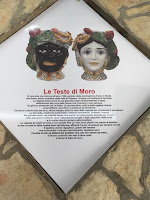 The story goes that in 1100 or thereabouts, during the time when the Arabs dominated Sicily, a beautiful young woman who rarely left her home was spotted watering the plants on her balcony by an Arab who fell in love with her. He managed to get to know her and declared his love to her, a passion which she returned. The inevitable seduction happened. Eventually the Arabs decided to leave Sicily and when the young lady discovered that this was on the cards, and that he had a wife and children back home, she chopped off his head and made it into a plant pot which she placed on her balcony! Just a little gruesome! 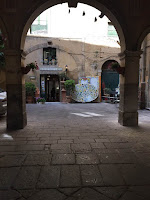 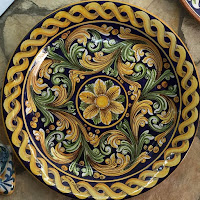 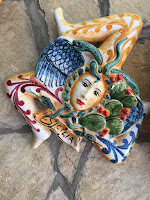 Almost accidentally we visited a church which contained examples of nativity scenes - Caltagirone is famous for its thirty or so nativity scenes displayed around the city at Christmas time - and curiously a electric train set running round a model of the city! 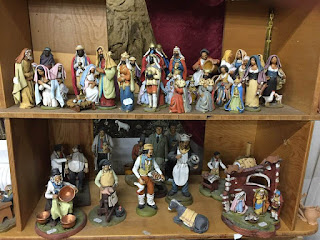 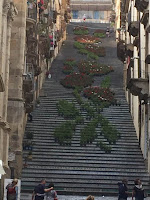 The church was next to an amazing set of steps, each with a different ceramic design on the step. We opted not to go up the steps but went for a refreshment break instead. 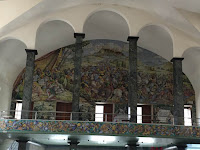 This was in a covered square at each end of which was a huge ceramic picture. Astounding! 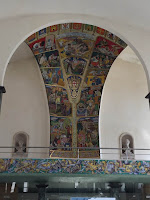 Running out of time, we took a flying visit to Catania, made even shorter by the traffic jam in the way. Yet another cathedral to admire, and an elephant, symbol of the city I think, in the main square. Pictures of these another day.

And then off to the airport - no traffic jams on the way out of Catania. Rather tired, but still laughing and singing silly songs, we arrived back in Manchester, where the skies are grey and it has rained on us.