Boris mayhem. Explaining (or not) Brexit. And a little hedonism.

Yesterday over lunch a friend was trying to convince me that Boris Johnson is a charmer. Not that my friend has met Mr Johnson, not as far as I am aware, but from what he has read about him and from what people who have met him have had to say about the man, he would not object to inviting him to dinner. I was not convinced. Oh, I am sure he can turn on the charm, but the impression I get is that he is bully. And a bully who is charming is none the less a bully.

Then this morning I read the news that the police had been called because of a noisy altercation between Mr Johnson and his girlfriend: a lot of shouting, some banging and crashing, a certain amount of screaming. In one report, a neighbour, a 32-year-old nursery worker who would only give her name as Fatimah, said: “Just after midnight I heard a lady shouting, but I couldn’t make out what she said, then I heard plates and glasses smashing and things being thrown around. “I was watching something on the television and I had to mute it because I was quite concerned, it was coming through the walls.”

Now, surely that last comment should read, “Iwas watching television and I had to mute it because I wanted to know what was going on”? Or am I just being too harsh and accusing Fatimah unjustly of having nosy neighbour syndrome?

Anyway, what will this do to Boris’s campaign to become PM? Will it make any difference at all? Or will all the Tory ladies who have been charmed by him in the past siml,y disbelieve it? We shall see!

The other day a Spanish friend asked if we are going to leave the EU. To Brexit or not to Brexit? Why had we not yet left? Why had Mrs May resigned? He was really puzzled. Was it really because Theresa really wanted to remain? A justifiable question, considering that she is said to have voted remain. How does a person who campaigned to remain even try to deliver leaving?

Attempting to explain the whole business of the Irish border, the backstop, the need to come to trade agreements, I realised that my friend thought that we were just being difficult and had clearly thought that having voted to leave we would have left the EU the day after the referendum. Which, I think, is what a lot of Leave voters thought at the time! 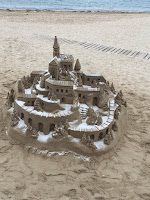 But that is all by the by. I am now in hedonist mode in Sanxemxo where the sun is not shining very much but where the pool is still very inviting. I was, however, the only one in, or even around, the pool late this morning. The sandcastle builders have already been busy down on the beach.

And further along the promenade there seems to be a competition of some sort for making water-sports-related pictures out of mosaic. 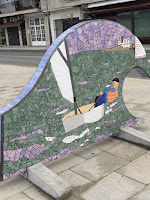 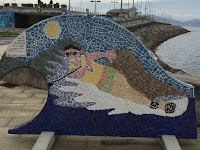 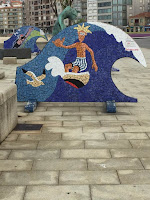