Last Friday, travelling to Vigo, after our long wait for the bus to Vigo from Porto airport, we went out to the bus stop, much more clearly indicated than it was the first time we did so over a decade ago. On that occasion we waited with our fingers crossed, unsure whether there even was a bus.

As it happened the bus on Friday was running late. But by now we are seasoned enough users of that bus service to know that it can often be up to 15 minutes behind schedule. We listened to first-time users stressing about whether they were in the right place, whether they might have missed the bus or misread the timetable.

Among those milling around was an Irish couple with whom we got into conversation, as you do. They had tickets for a bus company we had never heard of and which appeared in none of the notices and timetables around the area of the bus stop. The scheduled time for their supposed bus came and went with no sign of the bus. We told them about the AUTNA bus which we planned to catch. When our bus arrived, 15 minutes behind schedule at least, they decided to forget about the tickets they had bought for the no-show bus and catch the same one as us.

When we arrived at Vigo we suggested that we might meet for lunch one day during the week. A good idea, we all agreed.

Tuesday came and they got in touch. We were expecting a visit from our landlady that day but perhaps it would be a quick visit. No such luck! She needed to sort out things with FENOSA the gas company, who needed to make an overdue inspection our our boiler. This took forever and a day to deal with. And now I wait to see if they will contact me as promised in a fe weeks time to come and carry out the inspection.

So lunch on Tuesday was out of the question.

Wednesday was no good as the Irish were expecting someone to come and do some work on their boat, moored at the Bouzas marina, the more industrial bit of Vigo’s port. 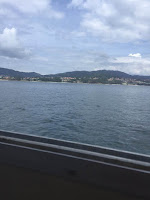 Finally today we all got in touch again. They were in Cangas, across the bay. Would we like to catch the ferry and join them for lunch? Yes, we would.

It must be ten years since we last went to Cangas, just a twenty minute boat ride away.

Down at the port as we made our way to appropriate quayside, a beggar approached us with a novel begging style. He needed to go to Cangas but was short of a euro or two to make up the fare. Could we help? He was in luck. I had a bit of change in my pocket. Now, he told me, he just had to hope others would be as helpful. I saw him on the boat as we crossed the bay so he must have managed it. We wondered if he spent all day crossing back and forth, making a little profit with every trip. Who knows? 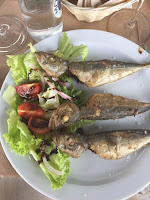 In Cangas, the Irish were waiting for us at the quayside. They knew of a place near the marina which served good value food. Good indeed! We had creamed mushrooms with prawns, peppery and tasty, followed by “chinchos”. Now, I have no idea what kind of fish “chinchos” are. They are probably sone fish we never hear of in the UK. Or maybe they are some fish caught too young and small to be really legally served up according to EU regulations. They were, however, very nice with a glass of Albariño and followed by a “mus de piña” - pineapple mousse.

A good menu for around €10 apiece! 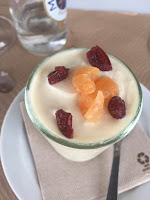 We set the world to rights between us and then we went off to catch the ferry back to Vigo and the Irish went off to their boat. They fly back to Dublin tomorrow. We are travelling to and fro over the next few weeks.

But we will all be back in the Vigo are in July and August and plan to have lunch and swop stories once again.

Nothing like a bit of networking!
Posted by Anthea at 12:09