So here we are, hurtling towards the end of our stay in Sanxenxo. Once you get to the midpoint of a stay anywhere time speeds up. This is a well-known law of some kind relating to physics, although probably not one that has been properly acknowledged as far as I am aware. No doubt psychologists would tell us it’s all to do with perceptions.

Anyway we got to Wednesday and time went into overdrive and now it’s Saturday and it’s almost all over bar the shouting and the prize-giving. Last night we had the usual special dinner of “arroz con bogavante”, a very nice dish with tasty rice and, if you are lucky, some tasty bits of lobster as well. If you are unfortunate you get some claws, crack them open and scrabble for the meat inside them. I was moderately lucky.

Probably even better than the main dish itself was the selection of starters served beforehand: Little roll-up slices of serrano ham with quince jelly (I think) on small slices of toasted bread.


It had been my intention to take some photos but in the event it was just not feasible as everything arrived on large platters plonked down in the middle of the table. Dessert really merited a photo but still did not get one. It was a very artistic creation of fruit, ice-cream and flaky pastry.

We sat at a table with some Belgian friends (they are friends from many previous tournaments here) and a random selection of Spaniards. As a rule on such occasions I have fun interpreting bits of conversation from one language to another. This particular bunch of Spaniards were not quite standoffish but made almost no attempt to include the whole table, i.e. the non-Spanish end as well, in the general conversation. I tried to initiate conversation with the ones closest to me. I managed to find out that they were from Malaga and that the maternal grandmother of their tiny boy is Swedish. Beyond that, nothing! The mother and child disappeared quite early as the tiny boy insisted he wanted to sleep, not in his buggy but in his bed. And the father ignored me for the rest of the evening. I gathered, from overheard rather than direct conversation, that he is a talented chess player from Malaga, so I was not really surprised to be ignored. He had probably sussed that I am a non-player.

We had a pleasant evening all the same. The Belgians are always quite chatty. This time they were regaling us with tales of their adventures kayaking yesterday, which sounded like an adventure I was glad to have missed. 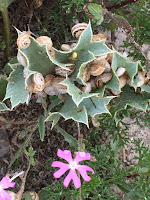 So no photos of food. Instead here are some pictures of the local flora and fauna - well, okay, just snails - snapped on my walk to Portonovo this morning. 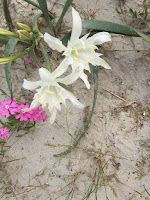 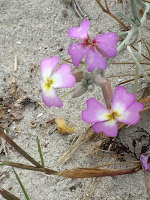 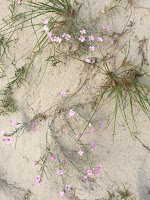 This seashell could well be an old-fashioned compact for ladies to carry around in their handbags. 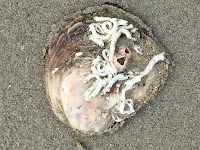 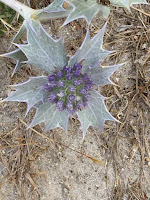 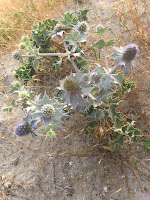 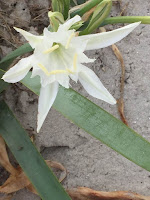 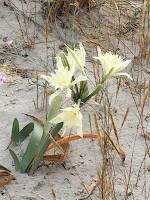 and the flowers I have decided to call sea-daffodils.
Posted by Anthea at 04:16