Writers having their say. And saying things correctly.

The Toronto Star newspaper has a cartoon with a message for Texas from Margaret Atwood, reminding them that The Handmaid’s Tale is a work of fiction, not a handbook on how to run a state. 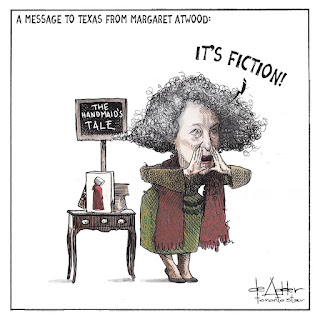 Lionel Shriver has been giving her opinion that we are diluting the British race by accepting and tolerating other ethnicities. To be truly British, the country needs to stay largely white, she opines. She maintains that such an opinion is not racist, a difficult argument to make.

Hilary Mantel declares she she feels “ashamed” of the UK government’s treatment of migrants and asylum seekers and is intending to become an Irish citizen to “become a European again”. In fact she is so ashamed to live in nation that elected this government that she has apparently taken Irish nationality so that she can become European again.

Three different female writers influencing the way we see the world. I’ve not read anything by Lionel Shriver but I have read quite a lot of books by the other two.

Thinking of “Britishness”, I can’t get very passionate about the purity of the nation. Most of us, even the whitest of us, came from somewhere else originally. The same applies, of course, to the Americans.

I do get a bit worked up about our language and the odd ways it gets misused. The disappearing ‘t’, replaced by a glottal stop, making all words ending it “..ity” difficult for some people to say, has long annoyed me, as does the disappearing “g” at the end of all words ending with “..ing”. And a rising intonation, turning statements into questions, drives me crazy. But what is taxing me at the moment is some spectacular mispronunciation.

On the radio news just now they have an expert on fungi. Before she got going they had a little discussion on how to pronounce the word. Is it “fungee”, with a hard “g”, or “funjee” with a soft “g”, or “fungeye” again with a hard “g”? The expert said it didn’t matter so long as you say it loud and proud. She then went on to talk about her work in Edinburg, or Edinburrow as she said it! That discussion is understandable but some words have an accepted pronunciation … or so I thought. But recently I have heard the following:-

Remnants, which surely has the stress on the first syllable, pronounced as “remNANTS”.

Decade gets the same treatment, becoming decade. “Decayed” is the past tense of the verb “to decay”.

Episode, with its hissing “s” changed to a buzzing “z” - epiZode.

The other day I heard “ideology” changed into “idjology”, but the speaker was not a native English speaker so she did have an excuse.

I could add to that “cleavage” becoming “Cleveland” but that was an autocorrect matter, resulting from someone’s inability to proofread her message before sending. So I won’t go on about that.

But nobody should get me started on the grammatical bits and pieces - I’ve took, I’ve ate, we done it, I seen him and so on - which seriously do my head in. It’s odd that nobody ever says “I’ve did it” or “I’ve saw him”!

Then there are the mangled expressions:-

“Off your own bat”, a cricketing metaphor, becomes “off your own back”, a mistake we have tried for decades (pronounced correctly) to correct in our otherwise very grammatical and linguistically correct daughter.

“One fell swoop” becomes “one foul swoop”, although that is probably an overcorrection.

I think I am perhaps just a little too picky!