Up the hill. Wild planting. Butterflies and moths - pluses and minuses. State fairs and their results. 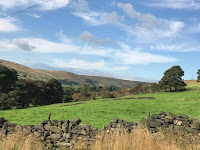 The other day we once again walked up Lark Hill, aka “the quarry road”; at least in our family it’s known that way. Stomping up the hill is a reasonable measure of how fit we are feeling. If we can manage to talk, as well as walk, most of the way up and still have breath left at the top, then we’re not doing so badly. So we try to “do the hill” at least once a week. The track is badly eroded though, by tractors as much as by the weather, and you have to watch your footing, but the views are spectacular and this year the rowan trees are putting on a fine display. 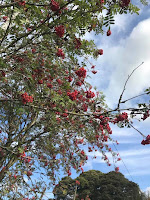 At the top we followed the track straight ahead towards Diggle and then round to the right heading for Dobcross village centre. Along that stretch of the path there are a surprisingly large number or buddleia bushes, not the kind of thing you expect to find alongside what must have started as a farm track. Who planted them? Well, in fact, I have my suspicions. At the height of daffodil season I bumped into Mrs Bradley, once the librarian in Delph, also the mother of two former pupils of mine, one of whom I occasionally meet when we are both out running. It’s a small world, obviously. Anyway, the now rather elderly but still quite active Mrs Bradley told me that she had planted a fair few of the daffodils along the edges of the path, a few more clumps each year. So it is quite likely that she also has something to do with the buddleia. We had met her again before turning onto the buddleia path. Had we run onto her later I might have asked her was she responsible. 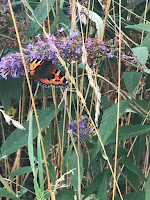 One of the bushes, still full of purple flowers, was also full of butterflies. Not without reason some people call buddleia the butterfly tree. These butterflies were all red admirals I think, or something very similar. It was quite difficult to walk through them as they tended to land momentarily on our clothing. I took some photos but none of them do justice to the swarm effect of thirty or so butterflies in the air. 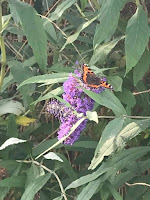 Funnily enough, despite my life-long dislike, almost horror, of things that flap, I can cope with butterflies, at least in the open air. Visiting a butterfly tent in an exhibition might be a different matter. Moths are certainly a different matter. Maybe it’s their fatter bodies that make them less appealing. Maybe it’s the fact that the ones that stray into the house blunder about and often fly straight at you rather than flapping gently and gracefully like butterflies or flitting like dragonflies.

Coincidentally I came across a report of a young boy who won a prize at the Kansas State Fair with an exhibit consisting of a dead moth. I read about state fairs in novels set in rural America. Research tells me that they began in the 19th century as a way of promoting state agriculture through competitive exhibitions of livestock and displays of farm products. The first was in 1841 in Syracuse, New York, and is still held annually. As US society has changed, becoming less agrarian, state fairs now include funfairs, displays of industrial products and entertainment such as musical concerts. But large fairs still attract more than a million visitors in the week or two that they go on. When I read about them they seem quintessentially American to me.

The moth in question was a spotted lanternfly, an invasive moth-like bug that has been causing massive damage to plants in US eastern states but had not previously been thought to have reached Kansas. It’s believed to have been accidentally introduced to the USA in containers coming from Asia and has caused havoc in fruit trees. The young boy’s successful entry in the Kansas State Fair has triggered an investigation by the US Department of Agriculture’s animal and plant health inspection service. I bet that young boy didn’t think he was opening such a can of worms.