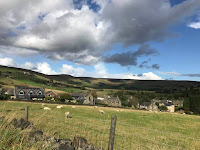 This morning I went running in the rain. That’s two days on the run I have done that. Yesterday turned into quite a nice day later on. I’m hoping for the same today, although the local weather forecast still suggests a 60% or more chance if rain. Nonetheless I have decided to take the risk and hang a load of washing on the line. It’s quite windy out there so there’s a good chance of stuff drying.

I did consider working a bit of weather witchery: hanging the washing to dry indoors as a means of charming the rain not to fall. It might have guaranteed a dry spell to go for a walk. But there’s a bit of blue sky showing between the clouds and, besides, you can get fed up washing draped around the house, especially when you’ve not got the heating on the speed up the process. So there it is, a line full of washing.

One of my miserable childhood memories is of winter washing days when my mother would stand clothes maidens festooned with towels, sheets, terry nappies in front of the fireplace to dry. Half the living room seemed taken up with it, there was no room to play and the air was permeated with the smell of damp washing. Those were the days.

Here’s another bit of nostalgia. I accidentally clicked on an article - well, really an advertisement for holidays in France - all about French châteaux. One of the places mentioned, but without a photo, was the château de Bienassis in Erquy in Brittany. We camped a few times in Erquy when our children were still quite young and I’m pretty sure we visited Bienassis.

So I looked it up on the internet. As well as pictures, I got information about how to visit, including the following notice:

So the French appear to have no qualms about demanding a “pass sanitaire” before they let you into their châteaux!

Another thing I read today is that breastfeeding mothers who have been infected with Covid19 continue to pass on antibodies to their babies for up to ten months, helping protect their offspring from the virus. Another good reason to breastfeed your baby. And the study thinks there are wider implications and that such antibodies could perhaps be used to treat people with severe Covid-19, preventing their condition from getting worse. Little by little we are finding ways to deal with the virus.

The Guardian newspaper is asking people to let them know if they took part in  “People Parking Day” over the weekend. (This asking for contributions from the public is, I suppose, one way of doing journalism.) Somebody called Brenda Puech was recovering from having been knocked off her bike by a motorist and began to think about people without gardens and often without cars to ferry them to public parks and gardens. Why not use the parking space outside your house? she thought. So, despite being denied permission from her local council, she had artificial grass put down in her unused (by her) parking space, set up chairs and potted plants and invited people to sit there and chat, maybe organise a book club or a yoga class.

“Not everyone is lucky enough to have a private garden so providing social spaces close to people’s homes is essential. I want every Londoner, whether they own a car or not, to have access to these public spaces,” she said.

And now campaigners are calling on the London mayor, Sadiq Khan, and borough leaders to allow residents to apply to create “parklets” in the streets where they live, with an aim to have one on every road in the capital.

The campaign is backed by the charity Living Streets and pop-up events are planned across the city this weekend. The best designed parklet will win £100, with judging by leading designers at the Victoria and Albert Museum, Sam Brown and Heather Whitbread.

Now, we and our neighbours have what used to be a parking bay outside our houses, all with double yellow lines ever since a housing development was built just around the corner - apparently parking outside our houses would impede visibility for drivers leaving the new estate! A surprisingly large number of people ignore the yellow lines and risk parking there anyway. Occasional fines have been issued. Maybe we should make that parking bay into a “parklet”, even though we don’t have any problems about access to the countryside, with country walks only minutes away. It would be quite entertaining to convert that bit of road into something else!