Some thoughts on weather and climate change. 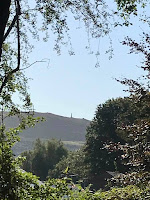 It’s another fine day in sunny Saddleworth. I posted some early morning sunshine pictures on Facebook, prompting a friend to comment, “But it’s still cold, only 12 degrees!” What does she expect in the second half of September? I expect it was a cold night for rough sleepers last night. The cloud cover had disappeared and there was a beautiful moon, which probably didn’t really compensate for the drop in temperature. This morning though was quite lovely, warm in the sunshine, well above 12 degrees, even if that’s what it was in the shade. It’s about time my friend  changed her grey-tinted spectacles for rose-coloured ones. This is the same friend who commented, erroneously, that we have had nothing but rain all summer. So it goes. 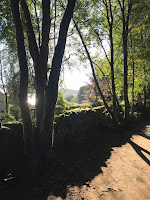 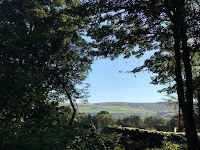 The prime minister has gone jetting off the America, “in a bid to accelerate progress towards an agreement at the Cop26 climate summit” according to newspaper reports. It seems a rather long way to go to put your arguments, not to mention the expense. I don’t suppose he’s travelling with budget airlines. Questioned about the views of his new international trade secretary, Ann-Marie Trevelyan, who back in 2010 expressed her disbelief in climate change, he reminded journalists of his own past climate change scepticism and pointed put that people’s views can change as new facts emerge. Quite so! But one wonders how much views are influenced by political expediency.

It’s a funny world we live in where your past expressions of opinion can so easily pop up to haunt you. Maybe we all need to go through our social media wardrobes to see what skeletons are hiding there. If they are going to come out and bit is, we need to be prepared.

There can’t be many people left who really think that climate change is not happening, although we may still differ as to the causes. I’ve listened to many a conversation between friend with scientific backgrounds, one putting it all down to man’s poor treatment of the planet and the other saying it’s all part of the natural cycle of things. Look what happened to the dinosaurs, after all.  But none of that should stop us trying to do something about our contribution to the climate crisis.

Here’s a link to one solution to one of the environmental problems - wildfires, in Ireland in this case. A young woman has got herself a £38,000 a year job as a goat herder in Howth, a peninsula overlooking Dublin city centre. One way of tackling wildfires is to create a firebreak, which can be done with expensive machinery, but they tend to grow back. Goats are notorious for eating almost anything and they can be used to keep down the undergrowth that would fill up the firebreak. Natural solutions! Keep up the good work.

Here’s a little conundrum that a friend and I have wondered about. We are releasing too much CO2 into the atmosphere but at the same time certain food processing companies are struggling because they are unable to get the CO2 they need. Is there no way to put those two problems together! It’s all to do with a general gas problem. The price of gas has gone up, fertilizer companies that produce CO2 as a side-effect have closed and so there is less available to food processors.

In the midst of all the reports of shortages, I came across an odd one. It seems that Britain has a baby shortage. You might think that reducing the population might not be a bad thing but it has all,sorts of economic impacts, one of which is that we need young people working to help pay for the upkeep of the older, retired, generations.

“At present, there are a little under three over-65s for every 10 workers, but by the middle of the next decade that ratio will rise to 3.5, and by the 2060s the number will be closing in on four,” said a report from a thinktank. “According to these projections, by 2050 a quarter of Britons will be over 65, up from a fifth today.”

I don’t think even I could blame Brexit for that. On reflection though, young people are said to be reluctant to have children, even if they really want them, because they are not earning enough to be able to afford them. Now that’s not all down to Brexit, but Brexit might have something to do with it. Improved and cheaper childcare would also help of course.

I’m quite glad to have got past that stage of my life.

And finally, on the Island of La Palma, in the Canaries, a volcano has been erupting. Homes have been destroyed. Villages near the volcano have had to be evacuated. Rescue efforts are being hampered because roads are being blocked as sightseers have driven up to get a look at the lava flow. Such is the oddness of the world!