Change of routine. Change in the weather. Confusing people and names. Stress factors.

After a few days of being up and about before 7.00am, it felt quite self-indulgent to snooze the alarm when it rang just after 8.00 this morning. From today, though, the small girl goes to school in the afternoon and her mother is able to take her there, something she has been looking forward to, almost jealous of her partner and me for being able to do the school run. The small girl, by the way, seems to be doing well - stickers for good behaviour and a little certificate for being kind and helpful. Long may this continue!

So I was back to my normal routine of running around the village before breakfast. Although the promised change in the weather has taken place - blue skies have disappeared again - it is still rather humid and sticky. Maybe the promised thunderstorms will take place this afternoon after all. We had rain in the night but nothing really significant. We shall see.

Secretary of State for Education Gavin Williamson has got himself in a bit of an embarrassing situation by confusing two young black men. In an interview he said he had spoken to Marcus Rashford in a zoom call when in fact he had spoken to Maro Itoje. Two young black men, one who plays football for England and the other who plays rugby for England, both of whom have demanded help for the underprivileged, cause confusion for a government minister. Is this racism, as some have said, or just ministerial interview stress? Hard to say.

As a teacher I had to memorise masses of names each year. It was a fairly regular thing that I would mix up a couple of students in a class, usually with very little similarity between the two and fortunately never in a situation where I could be accused of racial bias.

On the radio news they have been discussing covid passports for night clubs - the argument rages on. Young people won’t have the freedom previous generations had, say some. Venues need to be made covid secure, say others; ensuring better ventilation in  night clubs, for example. Somehow ai find it hard to visualise a well ventilated night club with masses of people all sweating together in close proximity!

It”s always hard to take back something that has gone out onto the media. Here’s a story of a New Zealander who was preparing a voicemail about a cinema being closed. He got very stressed and kept getting his wording wrong, leading to a fine string of expletives. Then he accidentally Included all his attempts in the final version, so full of expletives that it went viral. Proof, if it was needed of the increase in the use of the F.. word! 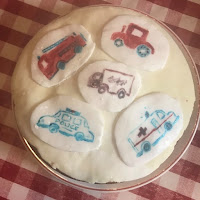 My life is much less stressful. The biggest stress today has been decorating a birthday cake for a 2 year old, complying with a request that the cake should feature wee-ooo-wee-ooo vehicles - emergency vehicles with which he is more than a little obsessed. It’s amazing how hard it is to draw with food colouring on fondant icing! Hey ho!