There’s a rather sick joke doing the rounds in various forms on social media. It involves a fragile looking dinghy full of immigrants and a larger vessel, probably coastguards or the navy. Someone leans put of the larger vessel with a load hailer and tells the immigrants: “Go back to France … unless you are really good tennis players or have HGV licences!”

There are also cartoons showing lorries with crumpled cabs and a large L-plate, alongside a driver being told he has passed the HGV test. Some suggest that the ability to reverse safely has been removed from the driving test. Yet others suggest that anyone who has played the children’s “Operation” game should apply to the NHS for a position as a surgeon.

I think this is supposed to be part of the phlegmatic British sense of humour helping us deal with crises.

Although our local shops and supermarkets don’t have masses of empty shelves, I noticed this morning that the co-op in Uppermill has quite conspicuous notices warning customers that some stocks are low because of delays in deliveries. The only thing I have noticed that they are short of is cranberry juice - hardly an absolute essential. However, I am assured that the larger branches of Tesco and Sainsbury’s and the like have more empty shelves, presumably,because they have more customers going through. The doom and gloom merchants keep predicting a thin time over Christmas - shortages of vital produce - we might even have to import turkeys from France! How will that be organised if we have difficulty with border controls and transport problems? We shall see. 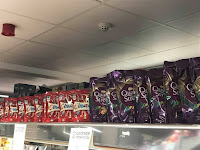 But, judging by the display of “Celebrations” and “Quality Street” and other chocolate selections on the top shelf in the co-op in Uppermill this morning, one thing we won’t be short of is chocolates! School and college staff-rooms will be able to tempt their staff to over-indulge once again. The last one I worked at used to start putting tins of chocolates out right at the start of December. So much for fighting obesity! It seems a bit early for such goods to be in the shops already but that’s the way of marketing in the modern world. Summer is officially over … make way for Christmas! Even the delicatessen has expensive “Monty Bojangles” chocolate truffles on display. The owner warned me that if I want to buy them as gifts I should do so in the next few weeks as they usually sell out early!

I wonder how it feels to be 18 and to discover that you have just become a product to be marketed. From various news reports I have heard or read, that is the fate that some think awaits young Emma Raducanu. Basically, she is young, pretty, talented, articulate, a role model for other teenagers - eminently marketable!

When Miss Raducanu withdrew from Wimbledon with breathing difficulties, John McEnroe commented that maybe her debut was getting “a little bit too much” for her. He was criticised at the time but he has defended his comments, saying he was really “very supportive” and was looking back to his own Wimbledon debut.

“I tried to relate it in a small way to my experience when I first went to Wimbledon also at 18. She did better than I did. I played Jimmy Connors, I hadn’t been on the Centre Court and I remember my legs shaking, feeling totally overwhelmed by the experience and almost happy that I didn’t win.”

I have always had a soft spot for John McEnroe. As a young man he rather resembled my younger brother, another John: similar build, similar hair, similar bad temper. We used to tease my brother about this, leading to outbursts of temper tantrums and cries of, “You can’t be serious!”

I hope the people hoping to benefit from marketing young Emma treat her gently. She seems quite a sensible young person. Let’s hope she gets to enjoy her success to the full!