It appears to be well-dressing time again. I came across it as I ran round the village i  the rain this morning.

This is a tradition that apparently dates back to the 14th century but, as it probably started as a pagan ceremony to thank the gods for a clean water supply, it may go back even further. It seems to be North of England thing. The best documented place for well-dressing is a village called Tissington in Derbyshire. Some experts say it may have begun there in response to having survived the Black Death in 1348, celebrating the purity of their water supply which they say helped them to survive. Alternatively, some put it later and explain it as celebrating having a continuous water supply even during a long drought in 1615.

Whatever the motivation, it began with decorating the top of the well with flowers and ribbons. I hope they were carefully placed. The last thing they would want would be for the decoration to fall in and contaminate the water supply.

Nowadays well-dressers use clay boards, a practice first recorded in Tissington in 1818. A wooden frame is filled with clay and a design made up of natural materials such as flowers, leaves, pebbles and so on is pressed into the clay. Lots of people visit Tissington to look at the well-dressings - about 50,000 people. Six wells - Children's Well, Coffin Well, Hall Well, Hands Well, Town Well and Yew Tree Well - are decorated during the week of Ascension Sunday, in May, with pictures of Bible stories or current events or anniversaries.

We never had well-dressing in Saddleworth in the 45 or so years I have lived here until a few years ago when there was some sort of revival of old traditions. We’ve always had brass bands and Morris dancers, with the Band Contest every year on Whit Friday. Then in September 2017 Saddleworth Museum, housed in an old textile mill, was celebrating the first anniversary of its £1million “Into the Future” renovation, funded by Heritage Lottery money. Two “Friends of the Museum” wanted to do something special for the celebration, something which at the same time celebrated old traditions from this part of England. And so they made a well-dressing, featuring the museum and a local monument called “Pots and Pans”. It was placed on Uppermill High Street outside the museum. And so a new tradition began and other Saddleworth villages were encouraged to join in, including Delph. 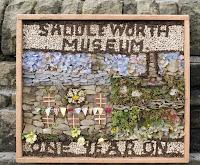 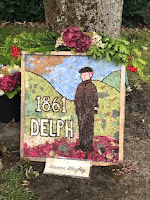 As far as I know we don’t have a village centre well to dress. Maybe there was one long ago but of so, I has long been covered up. However, for the last few Septembers a well-dressing has appeared, propped up against a tree at the end of the village centre, near the White Lion pub. This year it features Ammon Wrigley, local writer, poet and artist. Wikipedia tells me that …

“Wrigley was born at Oxhey, Denshaw, Saddleworth, on 10 October 1861, in a poor working family. His father was a mill worker, and he had one younger brother, Charles. The family moved to Castleshaw and he attended school there but started half-time mill work at the age of nine, and worked in local woollen  mills all his life. He married Emily Hudson in 1890 and died on 31 August 1946. At his request his ashes were scattered around the Dinner Stone, a rock formation on Standedge, on the moors above Saddleworth.” 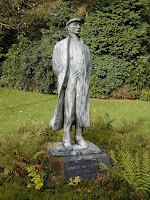 His statue stands on the grass in Uppermill, just next to the museum carpark. My personal connection with him is having taught one of his descendants in an adult French class in evening classes. I am quite in awe of the likes of Ammon Wrigley and Oldham’s suffragette Annie Kenney, who had to start working in local textile mills at an early age and still managed to go on and achieve great things in their lives.