Early morning, busy day, and a bit of Hobbit-style escapism.

It’s very pleasing to be up and about early in the morning when the weather is good. And today it was already nicely warm before 8.00 this morning. My daughter dropped her small daughter off with me just after 7.30 and the small person and I set off to catch a bus to school, a bus that was supposed to leave just before 8.00. In fact we got on a bus at about 7.50, which was earlier than planned. Consequently we arrived at school in plenty of time. Time to wander around collecting leaves for a craft project later in the day.

When I had eventually deposited the child safely at school I set off to walk home, a fine walk on a sunny morning. I spotted a wild flower garden en route. 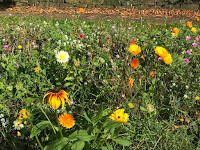 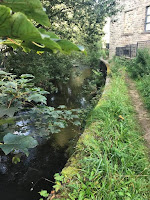 And I discovered that a path which has been closed to the public for at least a year has been restored and re-opened. 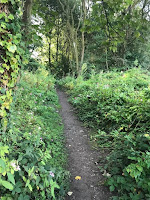 It brought me out in the middle of Uppermill where I picked up a couple of odds and ends before continuing on my way along the canal towpath and the bridle path back to Delph. The viaduct reflected in the canal was rather fine. 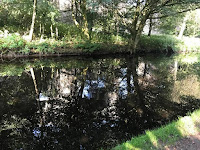 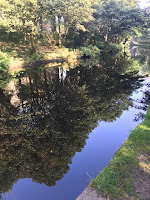 So I was home in time for a second breakfast. I did a bit of washing and general tidying up before heading off again to collect the small person. It’s a good job this is a very temporary measure as I could find my whole life taken up in childcare.

Today the small person came back to my house so that my daughter could combine picking up her smaller child from nursery and then collecting her daughter from me to take her off to drama class. I did comment the other day that children’s lives are very full these day!

Anyway, the small girl and I combined corks, cocktail sticks, bits of felt and fallen leaves to make various craft objects over the afternoon. She’s not a lot of bother to entertain.

I came across an article about an Italian who has bought a patch of land, in Italy, which he is converting into a little version of the Shire, where the hobbits live in Tolkien’s Middle Earth.

“In the two hectares of land he bought, he has already built his first house, where he lives with his family, in hobbit clothes, and his doors are also open to visitors. Here, the pastry chef, who has a degree in geology, plans to build the caravan of the dwarves, the green dragon inn and a large version of Bilbo Baggins’ house. His goal is to transform this piece of Abruzzo into a hobbit village, with an adjoining farmhouse, where visitors will be able to live in a magical world, which, according to Gentile, is not too far from the way people live in Bucchianico.

“Over time, I realised that my friends, my relatives and the farmers of Bucchianico have always lived as hobbits. They work like hobbits, carrying out jobs that are all in close contact with nature. They celebrate like hobbits, by organising festivals and dances and even dress up as hobbits.”

The houses to be built will be funded by crowdfunding so he needs to find a lot more hobbit-life enthusiasts, but they will be ecologically friendly. Now, is this Hobbit Shire or Cloud Cuckoo Land?