Monday reflections. Running around. History repeating itself … after a fashion.

Today began a little gloomy, but with fine reflections on the millpond which I ran past first thing this morning. 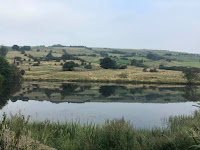 As I arrived home the milkman was about to deliver today’s milk. I hurried inside to get my purse and pay the latest bill. He commented that it was a good morning for a run, not too hot. But in fact it was a bit sticky for running. It’s a good job I was able to head straight for the shower after that.

I was originally scheduled to take our little granddaughter to school but in the end my daughter’s partner reorganised his time so that he could be dropped off at school with his little daughter and then run home, just swopping the day for his regular long run.

Later in the morning I went out to catch the bus and collect the small girl. By then the sun had come out and the day was warming up. The little girl had had a splendid morning, no problems, just as we expected. The two of us scuttled along to the bus stop to go back to her house. She had had lunch at school - fish fingers, carrots and a glass of water she told me - chicken nuggets, carrots and a glass of water she told her father when we got home. She was very excited to travel on the bus, something she rarely does, and chattered non-stop all the way home.

I was transported back about ten years to a time when I used to take her older brother and sister, then 8 and 6, to and from the same school. It has to be said that she was a much easier charge than her older brother who was an angry child, easily bored at the bus stop. We heard the cry of “I’m BORED” so many so that we had to ban the use of the B word. He would also take it into his head to set off at a run, leading me to drop the school bags, to be looked after by his older sister, while I raced after him, hoping to catch him and get back to the bus stop before the elusive bus arrived!! Happy days! Fortunately his small sister is much calmer on the whole.

After I had delivered her home, had a cup of coffee and been shown a range of toys in her bedroom, I set off for home again. Her older sister had checked times of buses for me. She is working from home for Transport for Greater Manchester, so she knows what she’s talking about.  It was amusing to listen to this young lady, so recently a child herself, being super efficient and answering phone calls: “Transport for Greater Manchester. Sophie speaking. How can I help you?” Suddenly all grown up efficiency! 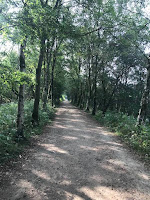 I stopped off in Uppermill on my way home to buy bread at the excellent bakery. So I phoned Phil to suggest he meet me halfway along the Donkey Lone bridle path, getting his exercise for the day. The Donkey Line was very quiet. As it turned out, Phil had already had a walk into the village to visit the chemist’s and consult the pharmacist about his thumb. The other day on one of our walks Phil, who has become a regular snipper of nettles and brambles to make paths more easily walkable, pulled up a nettle and was rewarded for his trouble with a wasp sting.

As has happened before now with mosquito bites he seems to have gone into allergic reaction mode. His thumb is now somewhat swollen and reddened. He has taken antihistamine tablets but two days on the swelling is still there. Following the pharmacist’s advice we have now drawn a biro line around the reddened area so that we can monitor progress. If it goes beyond the biro line we’ll seek further help. I am rather glad not to have allergies!

Tomorrow the small girl will be dropped off at my house bright and early for a bus ride to school. My morning will be busy again.