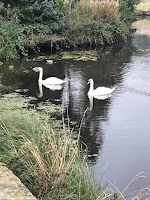 Out running this morning I noticed that the swans were back on Hull Mill Pond. Earlier this year, around nesting and mating time, we had a pair of swans there and we all hoped they might have chosen to nest in our neck of the woods. But then they disappeared. And now they are back, although for how long remains to be seen. 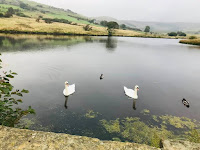 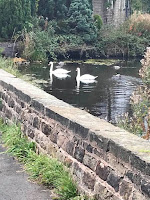 Running on into the path through the little woodland I met some of my dog-walking acquaintances and mentioned that the swans were back. With that, one lady told me she had just seen a deer with it’s faun in one of the fields. They ran away from her dog. Others have told me about deer in that little woodland but I have never seen any.

The other lady told me she had seen a fox and a kingfisher around here recently. Add to that the young heron we saw in the river on Tuesday and it is clear that our area is turning into a wildlife treasure trove.

Out in the wider world, the latest bit of crisis is fuel! It’s not that we don’t have fuel but the tankers that deliver it to petrol statIons can’t get there because of a driver shortage. The government is assuring car drivers that everything is under control, that deliveries will be made and that nobody should panic. Consequently masses of drivers are panic-buying fuel. My daughter tells me that she drove past Sainsbury’s and Asda petrol stations this morning and both had queues half way down the street. So much for having confidence in Mr Johnson’s government!

Meanwhile, Mr Johnson, still planning to withdraw the increase (I refuse to call it an “uptick” - what a ridiculous term! ) in Universal Credit, has been questioned by journalists about whether he thinks he could manage to live on £118 a week, the basic Universal Credit payment. As ever he didn’t exactly decline to answer but wriggled his way round it, saying, “ “I have every sympathy for people who are finding it tough, I really, really do.” He went on, “We have to recognise that in order to maintain the Covid uplift you’ve got to find another £5bn to £6bn in tax. That has got to come out of some people’s pockets.”

I could think of some pockets it could come out of. I am in a fortunate position where I don’t have to count every penny I spend, but I can remember a time when losing £40 - £50 a month would have made a difference to the family budget. And we were never as badly off as some people are now.

Fine words!  Now let’s see everyone paid a decent wage so they don’t need to rely on Universal Credit to top it up!

Here’s a link to some pictures from London Fashion Week. I want to know who really wants to wear such weird and wonderful creations. I was discussing clothes with a neighbour this morning. She has just had to buy a dress as her son insists on taking her on a cruise. Otherwise she would not bother as she wears trousers all the time. We both agreed that unless we suddenly put on or lose masses of weight and change size drastically, we probably have no need to buy new clothes, possibly ever again. Mind you, I doubt if I will keep to that. I do like a bit of variety in my wardrobe!

And finally, here’s another odd mispronunciation I heard yesterday. An expert on something or other on the news told us we must avoid falling into “pezimism”. I think he meant pessimism!