Snipping and snapping in the “forest”. Wearing facemasks. Dangerous posters. 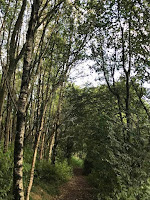 “Shall we do the forest walk?” I suggested yesterday. I’ve probably explained before that it’s barely a forest, just a patch of woodland between two roads that lead from Delph to Dobcross, with the River Tame chuntering along the bottom of it. But I’ve seen tourist info that describes the path as a woodland walk or a forest walk. When our son was small he called it the secret path, but at that time it was a lot less organised, more a trail through the trees and no sections with properly arranged steps.

The path can be very soggy when it’s been raining but we’ve had a run of dry weather and yesterday was a fine and sunny day. So it was a good occasion to walk the forest path without getting soggy trouser bottoms.

Then I asked, “Are you taking your clippers?” Clippers = secateurs. Ever since I bought a new almost pocket sized pair (well, they fit in the side pockets of combat trousers!) last year they have been taken out with us to remove brambles and briars and loads of nettles which grow at a small child’s face height and reduce the width of paths considerably. And I knew that some of the brambles on Gatehead Road, the road up the hill to Dobcross, had defied earlier efforts and were growing across the pavement again. “It won’t be a major clipping session. I’ll just attack the most egregious ones”, said the chief clipper wielder.

Well, all I can say is that there must have been a lot of egregious nettles that I walked past quite obliviously because I kept having to stop and wait for the chief clipper wielder to catch up with me. I did so much stopping and waiting that even my trusty Fitbit did not recognise that I had been out for exercise - you have to move at a certain pace and for a certain length of time for it to acknowledge that it counts as exercise. It’s a good job I don’t take its admonishments too seriously. 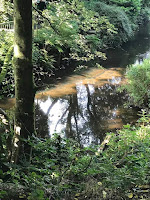 But we had a good walk, longer-lasting than intended and certainly very energetic on the part of the chief clipper wielder. As for me, while I waited I did some snapping - sunlight through trees and that sort of thing.

I had considered taking something to collect blackberries in but decided against it as the blackberry harvest around Delph seems very slow. It was the right decision.

There were very few blackberries.

I did however see some fine fungus! 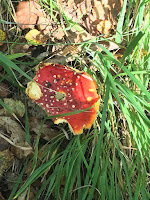 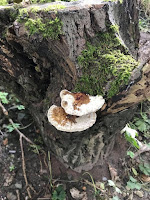 On my run this morning I stopped to snap some very fragile-looking specimens, looking as though they were made of tissue paper. 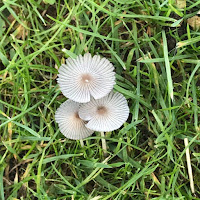 I popped into the local co-op for a few things on my way home from my run. Over the co-op radio came the announcement: “Feel free to wear a face covering in this store.” That’s a change from: “It is mandatory to wear a face covering in this store unless you are medically exempt.” According to official figures, across the country more than four million people have stopped wearing face masks this summer. At the beginning of May 98% of people said they had worn one in the last week when leaving the house, according to the Office for National Statistics. That dropped to 89% in the last month: still quite a high percentage of people still being careful  but its a significant drop. YouGov asked if people had “worn a face mask when in public places” in the past fortnight and found only 61% said yes, a fall of 10 percentage points from mid July to 9 September. Hmm! A major decision has been taken that Covid is over!

Of course, the government is hardly setting an example for careful “gathering”, with pictures of Cabinet meeting with nary a mask in sight! I did hear an explanation of this: all the people in the room know each other and so didn’t feel the need to wear face coverings! Really? So you can only catch Covid from strangers, is that it?  Muddled thinking, if you ask me.

“Behavioural scientists and Covid bereaved this week voiced anger at the message sent by images of Boris Johnson and his cabinet gathering closely around the cabinet table without masks, as average weekly fatalities from Covid rose to the highest level since March.”

Meanwhile, odd things appear to be going on with posters put up by Covid-19 conspiracy theorists and anti-vaccination nuts:

“Transport for London (TfL) said there had been a number of reports of razor blades being attached to the back of the posters intended to harm anyone taking them down, and that at least one person was harmed in an incident outside its network.

Trade union representatives for transport workers, who likened the tactic to that used in the past by fascists from the National Front, have raised the issue on a safety forum for staff and management and are to provide a warning to members.”

The world is clearly still full of dangerous loonies.