Spotting the local wildlife. What’s in a name?

Well, yesterday turned out better than I had expected weatherwise. The wind kept the cloud moving and we had enough bits of sunshine to make everywhere look more cheerful. Mid- to late-afternoon we took a stroll round the village and spotted a young heron in the river on our way back. 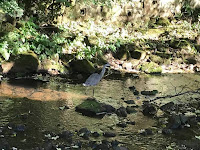 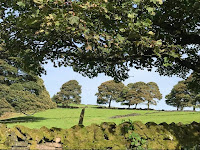 The day before though was positively summery. 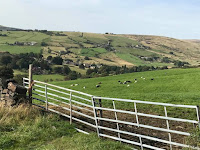 We walked up Lark Hill once again.

On the path at the top we came across a peacock butterfly on the path. He was totally ignoring all the red admirals that were careering around the buddleia. Just chilling on the path. Is there discrimination in the butterfly kingdom? 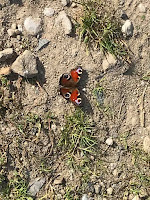 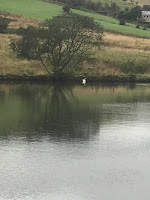 Today, however, seems more wintery than autumnal. I’ve put on extra layers of clothing and even switched the heating on for a while. The most interesting bit of wildlife I’ve come across today so far has been the lonely white goose on the duckpond - a very grey and forbidding-looking duckpond it is too today. The white goose is almost always there, the Billy-No-Mates of the pond. He tries to attach himself to the Canada geese, even helping them shepherd their goslings around the pond when they have them. But the Canada geese seem mainly to ignore him. They certainly don’t invite him to fly off with them. As I said, Billy-No-Mates!

Political Party conference season is getting under way. The Labour Party seems to be continuing to tear itself apart. Much is being made of the fact that this year it can be a proper face-to-face conference but it won’t help if the party keeps on being divided. So it goes.

On the political scene in France, it seems that rumours are going around of a far-right political journalist, Éric Zemmour, possibly intending to present himself as a presidential candidate. Posters have gone up in Paris declaring: “Zemmour Président”. But so far it’s all rumours. One of his lines is that France risks becoming an Islamic republic. Born in France into a family of Jewish Berbers who emigrated to France from Algeria in the 1950s, he is strongly anti-immigration and would like to make it illegal to give children non-French names. (Why are children of immigrants so fiercely anti-immigrant? I wonder.) It would be fine, he maintains, for children to be called Mohammed, for example, as a second forename but really for their first name children should have good French names like Jean-Paul, Marie-France and Claudette, like in the French textbooks I used to use in secondary school French classes back in the seventies.

France has long had fairly strict rules about names children can be given. It’s not permissible to give your child a ridiculous name, because it’s not in the child’s best interests. In recent years parents have been prevented from calling their offspring Mini-Cooper, Fraise and Nutella. But if Monsieur Zemmour had his way, even Anglo-Saxon imported names should be rejected! Inevitably, this being France, a satirical website has been set up called “Vite, mon prénom”, with a one click test to see if your name is sufficiently French. And so It suggests no more Peter, who becomes Nestor; James, who becomes Jules; Rosemary, who becomes Roseline; and that Karen should henceforth be known as Carmen. Zinedine, as in Zidane, would be Antoine, and Kylian, as in Mbappé, would have to become Sylvain.

Goodness knows what it would suggest for Summer, River, North, Ocean and other such names!

Monsieur Zemmour, by the way, has convictions for inciting hatred and is best known for his TV diatribes against immigration and Islam. Are there not laws against people with convictions being able to stand for election?