So Liverpool has lost its world heritage site status. Too much modern development apparently. I remember a Spanish friend telling me years ago that he did not like Manchester because it has too much of a mix of old architecture and modern stuff. At the time I disagreed. Many old Spanish cities have managed to keep their old quarter beautifully intact, the modern development taking place outwards into the surrounding, growing city. But Manchester has always been a changing, developing industrial city, losing some of its old stuff to bombings, ancient and modern. Mostly I’m still a fan of Manchester’s mix of old and new but I can’t say I admire some of the very tall building that have been going up in recent years.

I suppose the same applies to Liverpool and I have enjoyed visiting the dock area - a bit different to when my primary school took us on a visit to the docks, including a ride on the overhead railway that used to be there. I haven’t seen any of the new development as it’s a while since I have visited Liverpool. I expect that, like Manchester, it’s still worth visiting. Manchester doesn’t have a world heritage site status to lose though. Will the World Heritage Police go round checking that Liverpool has removed all notices about their now lost status?

Here is a photo of a bridge in Great Musgrave in Cumbria. It’s an old Victorian railway arch. You can see where the railway used to run.

There are structural problems with the bridge. It was built for lighter traffic than we have nowadays. Highways England was afraid that it might collapse under the weight of modern vehicles. And so they reinforced it … by filling the arch with concrete.

Naturally this bit of cultural vandalism has come in for a lot of criticism. Highways England may be forced to rectify it and find a better way of reinforcing the bridge. Bit in the meantime other ancient arches around the country are in danger of getting the same “assistance”.

I am reminded of art restorations that have gone awry!

Closer to home we have a bit of cultural vandalism of our own. When we walk up the hill to Dobcross we reach a point that we call IADH, It’s All Down Hill, because it’s the highest point on our walk. At IADH there is a good, old-fashioned gate (actually a fairly recent addition to the patch of land there). It’s a very traditional five-bar gate. We like to stop and lean on the gate, catching a last bit of sun on winter walks, catching our breath on summer walks, and admiring the view. Our smallest granddaughter likes to show off her gate-climbing skills on it. Yesterday evening we went out snipping and snapping and discovered that the owner of the land has strung barbed wire across the top of his gate, making both leaning and climbing an uncomfortable, scratchy and indeed possibly hazardous occupations. 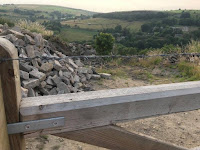 Why has he done that? There is already a strong padlock on the gate. Is he afraid someone will climb over  and steal his pile of old stones?

Beach huts are much admired at some seaside places. Another bit of cultural heritage in their way. We never had them on the beaches of my youth at Southport and Birkdale and Ainsdale . I always thought they might be a useful addition but it was not to be. Now it seems that beach huts, in those places fortunate enough to have them are selling for huge amounts of money. Who knew? Here’s a link to an article about it.