Things to do before the rain arrives. 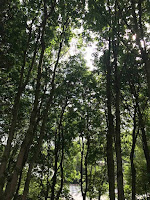 We’re still waiting for the promised rain. Not that I am especially eager for it to rain but I think the gardens might need it. Yesterday turned into a fine afternoon and evening. We waled the forest path, which we have hardly walked since the bluebells finished as it was so very soggy. Now it was fine and dry and very green. 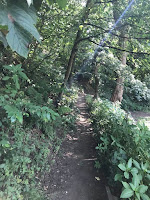 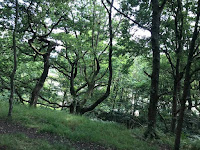 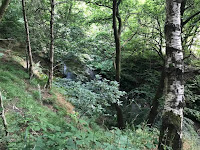 This morning I overslept. Or rather, I woke up half an hour later than usual and realised that I had not set my alarm. No snoozing the alarm this morning - just no alarm!

So I set off later than usual on my run. Hardly had I set off than my phone rang. My daughter had just dropped the children off at nursery and wondered if she could pop in for breakfast. So I suggested she should park her car and walk into the village, where I would meet her after following my usual morning running route.

Some time later in the morning my daughter and I decided to go and visit her daughter, taking gourmet sandwiches from the local bakery for her and her housemate for lunch. I thought I might pick up the good rye bread they bake, saving some space in my panniers when I cycle to the market tomorrow, but they had none. Plenty of other kinds of bread but not what I wanted. So just lunch-time sandwiches for the girls! 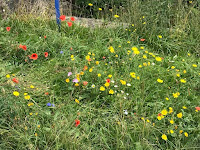 At my granddaughter’s house we sat and chatted for a while, watching her work from home on her computer, and occasionally being leapt on by her over-energetic, over-enthusiastic collie dog. In the end my daughter and I offered to take the dog for a walk to use up some of her excess energy along the local bridle paths and along the canal, admiring the wild flowers en route.

I read that Tokyo has a record number of Coronavirus cases at the moment. Would that have anything to do with an influx of athletes and journalists for a certain sporting event? Hmm! I wonder!

As we discuss how to ensure that poorer nations are able to vaccinate their people against virus, I came  across this article about how Francisco Javier de Balmis set off from Spain in 1803 to vaccinate the people in Spain’s colonies against smallpox. As there were no refrigerator-ships to keep the vaccine fresh, he took a group of children with him, infected them two at a time with small pox, making them ill but not killing them. In that way he was able to have the serum he needed when he got across the ocean. Ingenious. You would think modern technology could find a better solution nowadays. There is an exhibition about it in Seville.

And finally here are a couple of things I have found on social media:

“Dolly Parton didn’t spend her millions on vanity space projects, she’s spent it putting 150 million books in the hands of children and, honestly, more people should be like Dolly.”