Just past the cricket club up the road from our house there is a sort of scar on the pavement, black and messy, with a lot of sand scattered around. I saw it yesterday morning and wondered for a moment what it was and then I remembered a neighbour telling me the other day about huge drama going on at cricket club with fire engines and other emergency vehicles. There was a cricket match, or maybe cricket training, in progress. Loads of cars were parked, as they annoyingly do, on the pavement and suddenly in the late afternoon one of them had self-combusted. There was no-one in the car and nobody was hurt. Fortunately the fire was dealt with before it spread to other vehicles. So far nobody has been able to tell me how it happened. Imagine, though, parking your car as usual and suddenly having it go up in smoke.

Then today, in an article about amber warnings going out to various parts of the country because of excessive heat, I read about a bus stop self-combusting in Solihull. Goodness! I didn’t think there was enough combustible material in modern bus stops to make that a possibility. The most problems bus stops have around here are jokers finding it amusing to smash all the glass!

The article on the heatwave also warned against wild swimming unless done in an organised group. It can be dangerous, as I have thought for a while. A number of people have had to be rescued after trying to cool off in lakes and disused quarries now filled with water. Apparently the water is sometimes so cold that the shock to the body’s system prevents you from being able to swim. A few people have died this weekend risking the cold water! The temptation must be quite great though and it must seem like a good idea to take a dip and cool off! I think I’ll stick to cool showers.

In Oregon, USA, the wildfire known as the Bootleg fire is still raging. That’s nine days I think and over 500 square miles. Talking about this and the flood in Germany and Belgium with my granddaughter yesterday, she commented that it seems as though the world has had enough of our mistreating it and is now getting its revenge! Maybe it is!

Despite having walked miles with my granddaughter earlier in the day, in the cool of the evening, after we had eaten, I suggested that Phil and I might take a stroll round the village. After all, he had spent a good deal of the day working at the computer. Some fresh air and leg-stretching would be good for him. 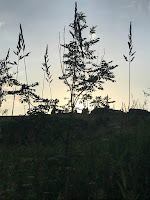 He ummed and ahhed a little but finally agreed. As we set off he grabbed the secateurs and his gardening gloves. Our stroll, incorporating footpaths and quiet lanes, turned into a snipping and snapping session. Brambles and briars and in particular nettles that encroached onto the pathways were shown no mercy. At one point one of the locals called down from her first floor balcony, “Thank you, sir! That needed doing! I have been trying to get my husband to deal with those brambles!” It’s nice to be appreciated! 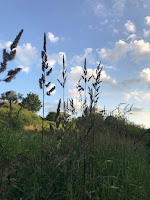 Almost two hours later we returned home, having covered the route that I run in about 25 minutes in the morning. But some good snipping was done and it was a lovely evening.

My brother-in-law regularly messages me with odd items of news. This is today’s offering:

The 13-year-old suffering with 'Covid Toes'

Medical professionals have labelled a condition linked to coronavirus 'Covid toes', after seeing an increase in cases.

Thirteen-year-old Sofia has been suffering with Covid toes since last October and now relies on a wheelchair to enjoy simple activities.

She told The Nine: "I'm quite scared to be honest because I don't know if I'll be able to do the things I like to do”.”

Now, Phil suffered from Covid toes. We sent photos of his toes to our GP who prescribed various creams but didn’t really know how to treat the condition. It made walking difficult and certain shoes very uncomfortable. Eventually it faded away on its own. One of our neighbours also had Covid toes, with a similar experience to Phil’s. Neither of them fall into the category of “younger patients” but it would seem that they both perhaps got off lightly!