Medals for sports? What I am reading. Food for thought!

We won a gold medal in BMX riding! Wow! I thought BMX bikes were for kids. It’s time we had olympic hopscotch!

Bethany Shriever, the 22-year-old who is our latest superstar had to fund her own qualification campaign after UK Sport cut its support for her event following Rio 2016, and two years ago. So it sounds a little as though UK Sport isn’t convinced that BMX is a proper grown-up sport.

As you can perhaps tell, I’m finding it hard to get excited about these games!

Here’s a link to an article about someone’s experience of another odd “sport”, rhythmic gymnastics. Judging by the cases emerging of young athletes in various disciplines suffering mental breakdowns now after years of perhaps too much training too young, I think the writer of the article, Rebecca Liu, had a lucky escape. 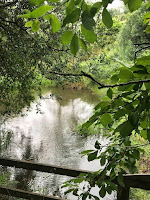 I’ve done my bit of athletic activity this morning, running round the village in the drizzle once again. Despite dire prognostications from the weathermen, the day is brightening up here. So maybe we can manage a walk later in the day.

Meanwhile I have been escaping into books again, current reading one I found on the shelf, one neither of us can remember buying. This is not a surprise and not the first time this has happened, as there are so many books in our house. This latest one is called “Fugitive Pieces” by Anne Michaels, a Canadian poet and novelist, Toronto’s poet laureate from 2015 to 2019.

The narrator of the first of the book a seven year old Jewish boy, Jakob Beer, was taken from Poland to Greece by a greek archaeologist when his family was killed by Nazis. Much of the book reads like a long prose poem; it’s well worth reading.

I keep having to look things up to see what they are, what they mean or what they refer to.

From the book I have learnt about Biskupin, the archaeological site of a late Bronze Age fortified settlement in north-central Poland. There is now an archaeological open-air museum there. Discovered in 1933, it was excavated from 1934 onwards. The site soon became part of Polish national consciousness, the symbol of achievements of the Slavonic forebears in prehistoric times. The existence of a prehistoric fortress, 70 km (43 mi) from the German border, was used to show that the prehistoric "Poles" had held their own against foreign invaders and plunderers as early as the late Bronze Age. Biskupin came to feature in paintings and popular. When the Germans occupied Poland in 1939, they renamed Biskupin “Urstadt”, possibly not liking a Polish achievement (is an accident of archaeology anachievement?). They continued excavations but when they were forced to retreat they flooded the site hoping to destroy it, which, ironically, led to very good preservation of the ancient timbers. Excavations were resumed by Polish archaeologists after the war and continued until 1974.

Fascinating stuff! It was from that excavation site that the archaeologist, Athos, in the novel rescued the young holocaust survivor Jakob Beer. He learns to speak Greek and English and late works as a translator.

And so I was also reminded about the fact that there were two forms of Greek spoken until demotic greek became the official language in 1976 - which seems a long time ago but is really very recent in linguistic terms.

A new word for me was “photomicrograph”, which I could make a guess at and which was confirmed by the internet: - a photograph of a microscope image. Some of the examples of images of photomicrographs are startlingly beautiful.