Snipping and snapping. Mystery men out and about - a bit of nostalgia.

Some time last year, probably round about this time of year, we started to notice that the footpaths we walked were getting very overgrown, making progress especially difficult for the smallest our walkers. We considered taking some garden implement along with us  but the cutting implements - garden shears and the like - were just too unwieldy. So on one of my excursions to Uppermill, I picked up a pocket-sized pair of secateurs -well, they fit in a large pocket anyway. Nominally OUR secateurs, they have been mostly used by Phil. Not quite as good as a machete for clearing severe undergrowth, they did the job. He made good use of them. I have also used them in the garden, my domain apart from cutting the grass. 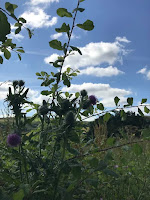 In recent weeks we have noticed brambles once again climbing over walls and across pavements here and there. Not to mention the sudden increase in nettles all over the place. And so yesterday when we went for a walk up the hill towards Dobcross, Phil slipped the secateurs into his pocket and we stopped at various places to make the pavement a little wider. 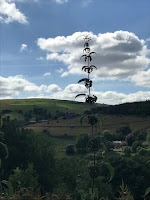 As he forgot to put in his pocket the new gardening gloves I bought for him a couple of weeks ago, he was unable to grasp the nettles! Nettle stings were not on our wish list! The nasty nettles will have to wait until our next excursion.

While Phil was snipping, I was snapping -

and close-up of flowers. 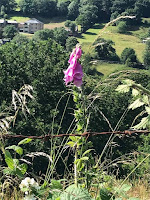 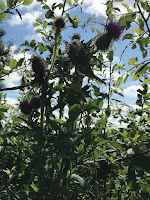 Someone else who is out and about at the moment is Keir Starmer. Apparently today he will be in Blackpool where, as Labour puts it, he will be kicking off “a summer ‘on the road’, taking Labour’s offer out to communities across the UK”.

As I read about this, I thought back to summers of my childhood, growing up in the seaside town of Southport. On certain days in the height of summer the town centre would be visited by Mr Lobby Lud. Anyone carrying the local newspaper, the Southport Visiter, could approach the person they thought might be the mystery visitor, and greet him along the lines of “You are Mr Lobby Lud and I claim the £5 prize”. If he was indeed Mr Lobby Lud and if they had used exactly the right wording, they could walk off with the £5 (or maybe more) prize. Well, most people could do this. My older sister and I were always annoyed that we could not join in because our father worked as a printer, printing the local newspaper. As offspring of one of the newspaper’s employees we were disqualified. Oh! The injustice!

Apparently this wheeze was invented by the newspaper industry in an attempt to encourage holiday makers to buy a newspaper - people on holiday apparently wanted an escape not only from work but from the cares of the world as presented by the newspapers. The first newspaper to try this out was the Westminster Gazette in 1927 and their mystery man was Lobby Lud. A name created out of the newspaper's telegraphic address: Lobby, Ludgate. His real identity was William Chinn, one of their reporters.

Those were more innocent times. Imagine encouraging people, even young teenage girls, to approach a complete stranger in that manner nowadays!

The new Lobby Lud, aka the leader of the Labour party, is not offering £5 prizes. The party says Keir Starmer wants to focus on debating three particular Labour policy proposals with people. It says they are:

A jobs promise to ensure every young person away from work for six months is offered a quality education, training or employment opportunity.

Labour’s proposals to ‘Make, Buy and Sell More in Britain’ – to help bring the jobs of the future to towns like Blackpool.