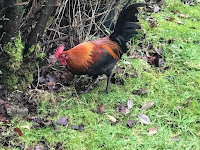 When I came back from my run this morning, as I did a bit of stretching on the front garden path I heard a cockerel crowing, amazingly close to hand by the sound of it. He could have been in the pub car park next door. Of course, there are farms in the area, but they’re mostly on the other side of the village. There isn’t one really close to our house. The nearest poultry I know of live free range in a garden just on the edge of the village, a good 15 minutes walk from here. Too far away for him to be crowing there and still sound so clear. 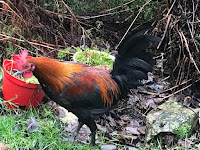 Some time later, as Phil was washing up the breakfast pots (this is part of a fair and equitable division of labour - I do most of the cooking, he does most of the washing up) and some odds and ends forgotten after yesterday’s family meal, he looked out of the window and declared, “We seem to have poultry in the garden!” And there he was, a very fine and colourful cockerel. I swear he could have won prizes in an agricultural show. He spent most of the morning striding round the garden as if he owned the place, stopping occasionally to scratch the ground and peck at this and that. He even chased a stray cat across the grass at one point. Goodness only knows where he came from! Perhaps he’s trapped there.

Michael Gove, a less colourful character, was apparently trapped in a lift at Broadcasting House on his way to talk to Nick Robinson on Radio 4’s Today programme this morning. I must say, it couldn’t happen to a better person. No, actually, I can think of a number of even more obnoxious members of the government it should happen to. This prompts a possible skipping rhyme:

Michael Gove stuck in the lift

Will they let him out again?

We have to wait and see.

How long will he stay there?

They got him out after half an hour and he made poor jokes about being “levelled up” and the wisdom of taking the stairs on his way out.

On the other side of the world, Novak Djokovic has been released from the immigration hotel/detention centre, much to the delight of a lot of Serbian Australians, who were seemingly unaware until their hero was incarcerated there that the place has been home to a host of refugees some of them for the last nine years:

“Jubilant Serbian Australians have taken their celebrations away from the detention hotel their beloved Novak Djokovic had been held in for days, leaving behind deflated refugees and their supporters on Monday.

Since December 2020 refugee advocates have stood outside the former hotel every day, trying desperately to bring awareness to the plight of the 30-plus men stuck indefinitely inside.

When the world’s No 1 male tennis player unexpectedly joined refugees and asylum seekers inside, it brought a new group of protesters and an international media spotlight.”

Meanwhile, the Guardian’s Jon Henley reports that the odious Nigel Farage is in Belgrade with the Djokovic family and has tweeted his satisfaction after judge Anthony Kelly’s quashed the Australian government’s decision to cancel the player’s visa, describing it as “a huge win for @DjokerNole this morning”.

It’s still possible that Djokovic’s visa might be canceled once more through the intervention of the Australian immigration minister, something which Farage declares would signify that there is little difference between Australia and a banana republic.

Maybe the Djokovic family don’t know who Farage is. Our our tennis hero (even though he is really a Scotsman) has tweeted to Farage:

“Please record the awkward moment when you tell them you’ve spent most of your career campaigning to have people from Eastern Europe deported.”

By the way, Farage’s appearance there confirms my suspicions that he is working on making a political come-back. People of the UK, YOU HAVE BEEN WARNED!!