Cold weather stuff here and there! 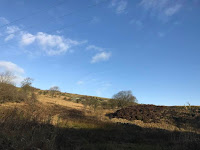 It’s been another of those after-the-storm, brilliant-blue-sky mornings. At various points in the night I was woken by what sounded like huge hailstorms but might have been just very heavy rain on the skylight windows. The milkman told me that when he got up the day still looked pretty grim … but then milkmen do get up at pretty grim hours. Even good days look unwelcoming at four in the morning at this time of the year.

By the time I braved leaving my duvet nest the sky was blue and the sun was coming up. Out and about, I saw the heron hunting for his breakfast. 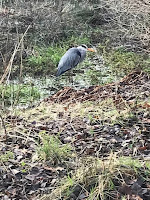 And our village looked rather fine in the early sun. It was very cold though. It still is, in fact.

There were odd pockets sheltered from the wind, however, where you could stand and enjoy the warmth of the sun. It’s beginning to make itself felt. It won’t be winter forever! 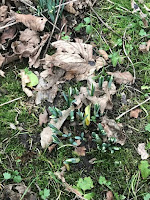 The snowdrops in my garden seem to think it will be winter forever though.

They’re still scrawny little shoots, just poking up, whereas in Dobcross they have beautiful mature snowdrops. Maybe they are a different breed from mine. 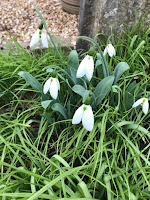 Apparently they have been having a cold snap in Florida. Somehow one doesn’t associate Florida with cold snaps. One of our neighbours is from Florida. Her car has a sticker declaring her love for the “Sunshine State”. But it seems that iguanas are falling from the trees because of the cold. They sleep in trees, relying on their feet to keep gripping the branches. When they get cold their system starts to slow down and they lose their grip and … oops! fall out of the trees. Not dead but presumably soon will be if they don’t warm up. Temperatures there have been down to -3 degrees.

A friend of mine who lives on one of the Greek islands has been posting pictures of snow on her island. That is also unusual, although not unheard of. She’s hoping that the snow as it melts will go some way to relieve the drought conditions they’ve had in recent times. I read today that hundreds of thousands of farmed fish died from thermal shock in a lagoon in north-western Greece after the heavy snowstorm that crippled the country last week. Schools were closed. There you go. I shouldn’t complain about a cold wind here!

We’re still mired in Covid. Then there’s the possibility of war over Ukraine. And prices are going up and supplies are going down, but not too much in our local coop store, I hasten to add. All in all, the country is in a mess but we’ve got the queen’s whatever-it-is jubilee coming up. England manager Gareth Southgate is getting in on the act, along with the likes of Ross Kemp and Gary Lineker, aiming to encourage millions of people to take part in neighbourhood parties across the country in June celebrating community spirit and the Queen on what they have dubbed National Thank You Day. They want us to break records for celebration.

It would need to surpass the 10 million party-goers who marked the Queen’s first 25 years on the throne in 1977 and similar numbers who celebrated the marriage of Charles and Diana in 1981 to stand a chance of entering the record books.

Goodness! I remember my mother decking her back garden with patriotic bunting back in 1977 and organising a party for friends and relations and neighbours. We didn’t go! And on the day of THAT WEDDING some friends invited us to their house for a Stuff-the-Wedding party. The television was not just switched off but put away in the attic for the day and topics like wedding dresses, number of bridesmaids, honeymoons, etc were banned! Of course, if we have a sudden Covid spike for the jubilee all parties could be banned … unless they take place in Downing Street!

It seems that the plan for National Thank You Day is backed by hundreds of organisations including the NHS, the Football Association, the Scouts, and the Church of England. Some of those I can understand but … the NHS? How does the NHS have the time, the energy and the resources to back anything? The mind boggles! But Ross Kemp has said,  “It’s our chance to say a great big thank you to the Queen for 70 years of service, but also to each other – the people in our own lives – families, streets and communities, who we rely on every day. The people whose support we couldn’t do without.”

He urged people to get together on the day in unprecedented numbers. “Make sure everyone is invited – rope in the neighbours, ask people from the next street over, get the local band to play.”