Rainbows … or not? Bank holiday. Being less efficient than planned! 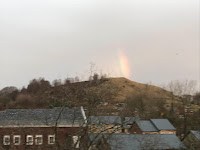 Today began with a rainbow. Well, the tail end of a rainbow on the hillside as I looked out of the attic window. Actually, it was probably the tail end of a vapour trail doing a bit of rainbow effect reflecting the light of the sun popping up over the hill opposite. Think of those Physics lessons with prisms! However, it seems rather more romantic to say it was a rainbow - a harbinger of better times ahead!

And, goodness knows! we need some of those better times. The doom and gloom merchants are predicting that Brexit changes will only really, truly begin to bite this year.

My granddaughter, who does all her grocery shopping on line was this morning bemoaning the fact that in the order that ASDA was delivering to her today 10 products are unavailable and 19 have been substituted. (Substitutions might be a way to discover new and interesting items you might not otherwise have tried … or maybe not … maybe just giving you an old familiar item that you don’t really need at the moment.) Her mother responding by commenting that in the various stores that she has been to during the last week there have been quite a lot of empty shelves. Of course, some of that might have been the result of people bulk buying in preparation for not being able to shop on New Year’s Day or, indeed, today which is a Bank Holiday to compensate  for New Year’s Day falling on a Saturday.

When I went out running first thing this morning I had forgotten that today is a Bank Holiday. My Spanish nephew has his birthday on the 7th - an arrangement that must have been a bit poor when he was  small child, having the Kings come with presents on the 6th and then his birthday immediately after. No doubt some people would have combined the two presents into one. From the presents point of view it is much better to have your birthday in July or August. So I noted my Spanish relatives’ address on a slip  of paper in my purse and took a pen with me, with the idea of buying a card at the post office, writing and addressing it there and then, and posting it straight away. But the post office was closed, naturally, because it’s a bank holiday today.

So much for efficiency! I should really have done this on Thursday or  Friday if I seriously hoped the card would arrive in time for his birthday. But I have to confess I was not thinking that far ahead. My nephew will have to accept belated birthday greetings, although as he is now at least somewhere close to 30, of not in fact already 30, I don’t suppose having cards to open on your birthday matters quite so much as it did when you were 5.

Besides, there is no guarantee that a card posted today would have reached the south of Spain by Friday. Someone posted this on the Campaign to rejoin the EU social media site:

“Friends here are some Brexit news relating to sending cards letters etc to the EU.  I send my friends and family in the Netherlands and Germany an Xmas card and a calendar for the year 2022 in white jiffy envelopes at the beginning of the second week in December -as I usually do at this particular time of the year.  I have just found out that none of my family and friend in the EU have received their XMas card and/or calendar.  However, it was good to note that friends in the USA and Mauritius had theirs well before the XMas event.   This people, is only going to get worse as time goes on, but it's good to know that if you send things far enough away from the UK it will get there in good time.”

Maybe I’ll just have to send him virtual card instead.

Here’s a bit of Italian irony to finish with: 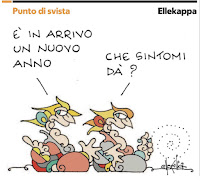 Roughly translated: A new year in on its way in.  What symptoms does it have?