Things going on in Australia. Things seen in Saddleworth.

So Australia has decided to deport Novak Djokovic. There seems to be a division of opinion on this: some people are relieved that Australia is staying safe and insisting on the rules being the same for everyone while others are screaming that this is discrimination against the tennis player.

BBC Radio 4’s Profile programme featured Novak Djokovic this week. One thing that came up was the feeling that somehow Djokovic is less cuddly and lovable than other tennis players of his generation. The big comparison is, of course, with the very lovable (apparently) Rafa Nadal. I used to use newspaper items about Nadal in my AS level Spanish classes. Several of my students had serious crushes on him. And even now a friend of mine would happily adopt Rafa if such a thing were possible.

He has been described as the supreme tennis diplomat, so here is Rafa Nadal on Djokovic’s current problem:

“If he wanted he would definitely be playing here without a problem,” said Nadal, with a not unfeeling shrug. “Everybody is free to take their own decision – but there are some consequences, no?”

That last section of his comment is very indicative of his almost but not quite perfect command of the English language: that use of “no?”, the Spanish equivalent of the French “n’est-ce pas”, to question or confirm the statement that went before. Getting the correct “isn’t it?”, “doesn’t he”, “aren’t they”, etc is hard work for foreign speakers of English. We have a friend in Spain who substitutes “not?” for the Spanish “no?”. That’s quite odd, not?

Getting back to Australia, we seem to have lost the Ashes again! Here’s an apt Michael Rosenism on that topic:

Was rather hoping the boys down under would bring back some glory. I would have grabbed some rays of glitter from the victors’ laurels for myself. Not to be. On we tread across the sea of despond.

Here’s another little something from social media:

“One of the more controversial parts of the Nationalities and Borders Bill is that it gives the Home Secretary of the day (Priti Patel) the power to strip someone of their UK citizenship if they present a danger to the UK.

Let's use their Bill against them!

The Home Secretary should strip Boris Johnson of his British citizenship.”

Onto other matters, here in Saddleworth we went out for a walk yesterday afternoon, hoping to catch the last of the day’s winter sun but in fact we only caught the winter sunset. 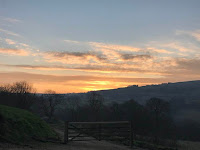 In Dobcross I spotted the first snowdrops of the year. In my garden the snowdrops are only just poking their shoots above ground but these were in full bloom. It was the same last year. They are very large snowdrops too, so I have decided that they may be foreign imports - interlopers! - or that there is something odd in the Dobcross soil.

Incidentally I learnt a new word yesterday: galantophile = a snowdrop lover! Who knew. There is a snowdrop festival in Devon apparently -here’s a link to some info - where you can admire different types of snowdrop. Last year they couldn’t open the gardens for the festival but now all is well again. Perhaps the Dobcross snowdrops feature there.

And finally, my brother in law has sent me a photo of the Northern Lights seen over Saddleworth Moor. Impressive! I never knew they could be seen from here! 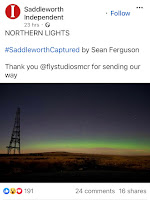