Chilly but sunny. Does it matter what you know? Fiestas with bonfires and horses. 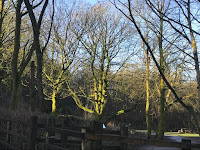 It’s another of those days when the weather does strange things. I woke to the sound of quite heavy rain and snoozed my alarm while I considered whether it was raining too hard for me to cycle to Uppermill market, whether I might put my waterproofs on and walk there or whether I might just give up o  the idea and stay in bed. While I thought about it the noise level of the rain eased off a little. By the time I got out of bed and looked outside it was clear that the rain was about to stop. So I decided to cycle but with a proper waterproof and not my thin running waterproof which is only good for light drizzle. And by the time I got my bike organised the sky was beginning to clear. I rode back from the market in the sunshine, rather chilly sunshine but sunshine nonetheless! It’s turned into a nice crisp day. 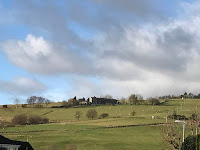 The market was looking a little depleted, just three stalls - slipper seller, fruit and veg man and fish man. Apparently the cheese and biscuit lady is not expected back until next month. Has she gone off in search warmer climes? Is she not well?  Maybe I’ll discover eventually. In the meantime my source of gluten-free oaty biscuits for when my brother-in-law comes to visit is not available. The gluten free offerings from the coop and Tesco are nowhere near as appetising as those oaty biscuits. I didn’t know she was going to be absent for long.

Of course, ignorance is no excuse … unless you are the leader of a country.

So nobody told Mr Johnson that the drinks party was against the rules? What a surprise! Surely you would expect the prime minister to be aware of what the rules were? Wasn’t he involved in setting the rules. Surely if he doesn’t know what the rules are he should be judged incompetent! You couldn’t make it up!

There’s a section of the Guardian newspaper online that they call “In Pictures”, basically collections of photos relating to current events and things going on around the world. I was attracted to this one today.

There’s something about pictures of bonfires that is very attractive. This lot came from a Spanish fiesta called Las Luminarias, held in honour of Saint Anthony the Abbot, the patron saint of domestic animals, in San Bartolomé de Pinares. The fiesta, which dates back hundreds of years apparently, took place on the 16th to 17th of January, for the first time since the pandemic started. Dissatisfied with the bits of explanation alongside the photos I decided to do a bit of googling.

San Bartolomé de Pinares is in the province of Ávila, to the north-east of Madrid. The story goes that centuries ago an epidemic killed all the horses of the town. Since then they light bonfires, the smoke of which is supposed to purify the horses and protect them from disease. Fumigation, I suppose. So on the evening of the 16th, the eve of the feast of Saint Anthony, they have a mass, of course, and then they light the bonfires. Then the local “jinetes”, horsemen, are blessed by the bishop and ride through the streets jumping over or through the bonfires. (Hmmm! More on that later!) this goes on all night and on the morning of the 17th Saint Anthony’s day, there is a competition to see which jinete can collect the most ribbons hanging a rope. Lots of excitement, lots of bonfires, probably fireworks, lots of food and drink: a good time is had by all … apparently! People come into the town from other parts of Spain, and probably other parts of the world, to see it.

But what about the horses? Surely it’s not natural for a horse to go jumping over bonfires!

Really? I wouldn’t have thought the horses really have such a good time.

And what is it anyway with the Spanish and leaping over bonfires? At the feast of Saint John -la noche de San Juan - bonfires are lit and people leap over them, especially young men who want to impress young ladies, I suspect!

Don’t get me wrong. I love a good bonfire. Some of the best parties I have organised have been for Bonfire Night on November 5th. But nobody ever tried jumping over the bonfire. We were all much too sensible, even after a glass or two of mulled wine.