Another anti-false-information celebrity. Disagreeing and then agreeing with my sister. Some nostalgia.

Well, it seems that Joni Mitchell has joined forces with her old friend Neil Young in asking Spotify to remove her music from their system, in protest against their broadcasting false information about the Covid vaccine.

“In an act of solidarity between two veteran rock stars with a shared history of espousing progressive causes, Joni Mitchell has joined Neil Young in removing her music from Spotify in protest at it hosting a popular anti-vax podcast.

Mitchell, whose 1971 album Blue is regarded as one of the greatest of all time, is the first high-profile musician to take a stand alongside Young against the streaming behemoth.

“Irresponsible people are spreading lies that are costing people their lives,” she said in a message posted on her website. “I stand in solidarity with Neil Young and the global scientific and medical communities on this issue.””

On the other hand, I fear that my Spanish sister, incidentally a huge Eric (anti-vaxxer) Clapton fan, may herself be turning into an anti-vaxxer. Yesterday morning she posted this on Facebook:

“My thoughts have been expressed by this post a friend Suárez:

Notes from a nurse…

I had never heard of a vaccine that spreads the virus even after vaccination.

I had never heard of rewards, discounts, incentives to get vaccinated.

I never saw discrimination for those who didn't.

If you haven't been vaccinated no one has tried to make you feel like a bad person.

I have never seen a vaccine that threatens the relationship between family, colleagues and friends.

I have never seen a vaccine used to threaten livelihoods, work or school.

I have never seen a vaccine that would allow a 12-year-old to override parental consent.

After all the vaccines I listed above, I have never seen a vaccine like this one, which discriminates, divides and judges society as it is.

And as the social fabric tightens… It's a powerful vaccine! It does all these things except IMMUNIZATION.

When last I spoke to her properly we almost fell out over her reluctance to have the booster vaccination. Her son, thirty years old, has refused all Covid vaccination, accepting all the conspiracy theories about it all being a ploy to control us. Now I think he may have influenced his mother’s thinking as well. As far as I am aware, nobody has ever suggested that the vaccine prevents us catching or transmitting the virus. Neither do I think anybody ever said that about the flu vaccine. This is a different sort of vaccine that may prevent us having too serious a dose of the virus and perhaps avoid overloading our hospitals with desperately ill people. We still don’t know enough about this virus and we need to continue doing all we can to keep it under control.

I do agree with something else my Spanish sister has been going on about: the problems caused by Brexit. She recently received a parcel from my English sister. It was a package of knitted clothes intended for child’s baby doll. My English sister wins prizes in summer fairs for her knitted baby clothes. The smallest size of the clothes she makes is perfect for premature babies or certain baby dolls. She passes on the finished garments to people who can make use of them. And so she sent a parcel to our Spanish sister to give as a gift to the child of friend. My English sister had to fill in a declaration as she posted the parcel, giving the value of the contents: about £20, she estimated. When the parcel arrived in Spain, our Spanish sister had to pay 9.95€ before she could receive the parcel, either import duty or VAT. Just another Brexit benefit!

Moving on to something else, in the book I am currently reading, “in the Eye of the Sun” by Ahdaf Soueif, largely about growing up in Alexandria from what I have read so far, one of the characters, back in 1968, at one point talks about her vanity case as her “main symbol of adulthood”. Now, in my collection of family photos there is one of me and my siblings standing together. It may have been Christmas, even Christmas day. We’re all in our Sunday best. All three sisters clutch a vanity case, which we definitely received as Christmas presents. It was probably 1961 or 1962, judging by the size of us all. My older sister would have been about 14/15 and looks terribly grown up and sophisticated, but still young enough to be wearing white ankle socks. I was maybe 12/13, a bit gauche in my school raincoat but still with my vanity case. My younger sister (aka my Spanish sister) would be 6/7, a bit too young in the eyes of her older sisters to have a vanity case at all but there she is. Our brother, 8 or 9 years old is just there, nothing to make him stand out apart from maybe having bis school scarf wrapped around his head to keep his ears warm. But it’s the vanity cases that make the picture for me. We had received them as Christmas presents and thought we were the bees knees. 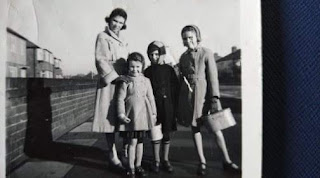