Lost and found family heirlooms … of a kind. Storm Aurore. Peacocks and sunshine.

The fruit and veg man at the market last week left behind a sort of agricultural tool, a very old-fashioned, and very old, sort of hoe, long in his family.  It has a long wooden handle and then a kind of curved metal end with the hoe section flattened at the end. You could imagine a peasant using it to break up clods of stubborn earth. In fact, I think I have seen Galicians using something similar on their “terrenos”. I think he brings it to the market to reach up and pull his awning over his stall. Anyway, last week he put it down next to the pavement alongside his stall and forgot it.

To his amazement it was still there yesterday morning when he set up his stall. The fishmongers daughter said that if it had been in their bit of Greater Manchester it would have been long gone. I suspect it was hidden by parked cars in the time between the two market days.

He was mightily relieved to recover it as he said it’s almost a family heirloom, isn’t really worth much, indeed the handle is probably worth more, but he doesn’t like to lose things that have been in the family for generations.

I know how he feels. Yesterday I got out my grandmother’s darning mushroom to mend some socks.

As he was telling us this it started to rain. I had managed to cycle to the market in dull and cloudy but dry weather and was hoping to make it back home before the forecast rain began. No chance! It was several minutes, and a wet front seat later, that the fruit and veg man remembered he had left the windows to the cab of his truck open! A day of mixed fortunes for him.

So I rode home in the rain and had to change my clothes when I got back. Shortly after that it stopped raining. This did not last long though. Just after lunch time we had thunder, strong wind, and lashing rain with a few hailstones thrown in. I guess this was maybe the tail end of Storm Aurore. On the TV news later they showed footage of a bits of Widnes that was struck by a tornado. It barely lasted a minute but it threw garden furniture around, up-ended wheelie-bins, tore roof tiles off houses and damaged cars. Other parts of the country, indeed other parts of Greater Manchester, had flooded roads. It seems we got off lightly. 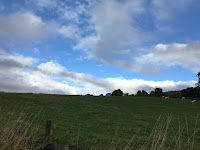 After the storm had worked itself out, at any rate the bit of storm we got, the day improved considerably. We went out for a walk later, equipped with just-in-case waterproofs and umbrellas that we didn’t need.

Today dawned bright and clear, with blue sky and sunshine. 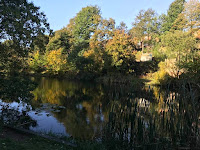 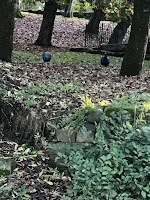 I spotted peacocks in a garden up the road from us.

We’ve seen them before but Ii have no idea whether they actually live there. Their tails look rather bedraggled but that’s hardly surprising if they’re living outdoors.

I’ve still not seen the deer that people keep telling me about in the valley just behind the village. One day… maybe…!