Weather. Flu jabs. NHS. Going to California and into space. 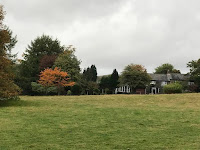 Today is dull and damp again. Fortunately there are bits of autumn brightness - and blackberries -here and there. 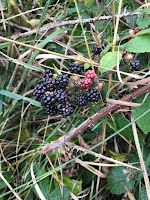 The weathermen promise sunshine tomorrow, but it will be colder sunshine than we have been used to. So it goes.

I had a phone call from our GP’s surgery this morning. i almost rejected the call as my phone announced it  as an “unidentified caller”. As a rule those are scam calls trying to persuade you that you need to send them your bank details. In the end I accepted this one, prepared to give the caller short shrift, but it turned out to be the receptionist at the surgery asking if I was interested in a flu vaccination this year. At last! So now we have appointments for Monday at our local surgery. No mention of a Covid19 booster jab as yet though!

The radio news is telling me of the crisis in the NHS at the moment, people having to wait for routine operations, emergency patients having to wait hours to be seen. Nobody is saying anything about the A&E departments closed by the people who have been running the country for the last decade, or the shortsightedness of not increasing the numbers of doctors and nurses in training during that time.

They’re expecting things to get worse rather than better as this year there will be flu to cope with as well. So getting our flu vaccinations is us doing our bit to try to reduce pressure on the NHS. Maybe someone should consider the matter of persuading people to wear face masks in indoor places as well!

One of the people who was running the country, well, sort of, as a kind of adjunct to the Tories, is Nick Clegg. I used to think he was a good bloke. I’m pretty sure it was Nick Clegg I heard speaking, quite impressively, at a Europe conference I took students to in Paris about 14 years ago. Then he got into bed … oops, I mean coalition - with the Tories and it was all downhill from there. And now he’s working hard to defend Facebook, which must be quite a difficult job at the moment, but he is reported to be well paid for it. £2.7m a year was what one report said, and apparently he lives in a £7m house - complete with a pool, “outdoor fireplace” and hot tub – in San Francisco. He’s beginning to look plump and prosperous while his boss still looks rather like Data from Star Trek. Mrs Clegg, Miriam González Durántez, has talked about northern California as a paradise of second chances, saying: “People praise failure here in a way we don’t. It’s so healthy.” I suppose it is if you have lots of money.

Having mentioned Star Trek, I have to comment on Captain Kirk finally going beyond “the final frontier”, up into space, if only briefly. William Shatner seemed very moved bybhis brief experience of space travel. Our own Prince William seems to think we should spend those huge amounts of money on sorting out the world: “We need some of the world’s greatest brains and minds fixed on trying to repair this planet, not trying to find the next place to go and live.” Well, good for him!