Benjamin Zephaniah, poet, wrote about his love of football as a child, no, probably a teenager. He was a Villa supporter. He loved belonging but some aspects of being a football fan disturbed him. “Football was getting more violent.” he wrote. “There would always be whispers: ‘We’re meeting the West Brom fans for a scrap in the park after the game.’ Or: ‘We’re organising something with the Man United fans round the back of New Street Station.’ I loved the songs more than the fighting – even if they were all very violent songs.”

What is it about being a football fan that leads to such fighting? In some cases it’s because two football teams in one town have different groups of followers, often splitting traditionally into Catholics and Protestants. But surely we should be able to put  that behind us now. And it doesn’t explain the need for “a good fight” to make an evening complete.

Benjamin Zephaniah recalls, “We’re singing all those songs on the way to fight Man United and we walked past my house. I remember looking up and my mum was doing that mum thing of changing the curtains or cleaning the windows. I thought: ‘Here I am, going to the train station to beat up some people just because they come from Manchester.’ If I lived in Manchester, maybe I’d be a United fan. This is just stupid. I went home and never watched a game for more than 20 years”

And now apparently he is going to present and narrate a new BT sport documentary that celebrates the influence descendants of the Windrush generation have had on English football. Zephaniah’s mother left Jamaica for the UK 65 years ago, one of the Caribbean immigrants invited to move as British Commonwealth citizens. 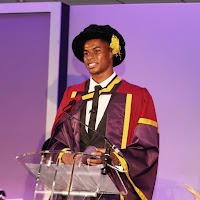 Marcus Rashford, footballer, meanwhile has just been awarded an honorary degree from the University of Manchester for his work in fighting child poverty. He said it was rather bittersweet coming after the reduction Universal Credit.

Marcus Rashford has said that the government's cuts meant "millions of families across the UK lost a lifeline" in a speech at the University of Manchester ceremony at Old Trafford. At 23, he became the youngest recipient of an honorary doctorate from the university.

This morning my daughter and I went to visit my eldest granddaughter, mainly to reassure her that she CAN cope with returning at least briefly to the office. Amongst her other anxieties, this granddaughter, the oldest of the collection, has massive arachnophobia, which I have mentioned before now. I thought of her again as I read this article which sets out to explain to us that “ants are clever, moths are fun to stroke and spiders can protect you from even worse horrors … “. Oddly enoughI can cope with the spiders but the rest of the insects give me the heebie-jeebies!  So it goes.