Is it Hallowe’en yet? Cashing in on stuff. Lorry driving! 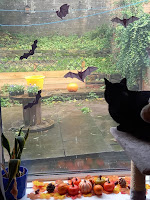 My daughter-in-law has sent me photos of our 7-year-old granddaughter dressed up to go to a Hallowe’en disco at her junior school. A most charming witch she is too. It’s not actually Hallowe’en until a week on Sunday but it seems to have arrived. The local coop is festooned with spiderwebs and large spiders. A house up the road has put Hallowe’en decoration all over the place. The cafe and gift shop in the village is selling Hallowe’en greetings cards. And my oldest granddaughter, the one who is terrified of spiders, has sent me a photo of her window festooned with stick-on bats. Her black cat got on on the act as well.

On the radio news they were talking about Hallowe’en attractions. People pay to be frightened, to be chased down alleyways by axe-wielding monsters. One woman interviewed at one such venue declared: “We had none of this when I was a kid. I don’t want my daughter to miss out so I’ve brought her to this today.” A young girl protested that the shops are already full of Christmas stuff: “What about Hallowe’en? That’s what I want to know”, she declared. How odd!

Actually I agree with the young girl as regards her protests about it being rather early for Christmas stuff to be in the shops. Mince pies should not be on sale in mid-October. Neither should Cadbury’s Snowballs and other such specifically Christmas confections. There is plenty of time for us to overindulge when mid-December rolls along. But that’s a different matter.

Over the last two decades Hallowe’en has become big business - Hallowe’en greeting cards, Hallowe’en costumes not just for children but for adults as well! Some say we’ve imported it from the USA, which is odd as so many parts of the USA are quite devoutly Christian and must be opposed to this pagan festival. More influential, in my opinion, are the scary films and tv series. This too is odd. Back when most films and TV series seemed to be about cowboys, children played cowboys and indians but you didn't see adults joining in. Similarly, ancient tv series about hospitals such as Emergency Ward 10 or Doctor Kildare, and more recently ER didn’t promote everyone to play doctors. However, Dr Kildare did launch a fashion in shirts with back to front collars.

Everything is a money-making opportunity however. One of the latest I have come across is menopause-friendly clothing!! Apparently there’s a big-business opportunity there. All women go through the menopause, some with no trouble at all, others with a great struggle. For the strugglers, help is at hand in the form of advice on what to wear, which colours will not highlight the fact that you are a bit flushed, and all that sort of thing. And alongside it is a range of comfortable but still stylish wear to get you through this problematic time. As I said, everything is a money-making opportunity for somebody!

As if most women didn’t have their wardrobes full of clothes in different sizes, ready for losing or gaining weight, stuff to feel comfortable but stylish in!

Here’s a bit of yesterday’s news: in Bristol a lorry apparently reversed into the harbour yesterday, leaving the container partially submerged and the cab perched on the dockside. This has led to numerous comments about the driver possibly not having had to pass the reversing test in order to get his HGV licence.

Meanwhile, I still wait for news of my Covid vaccination certificate. Fingers crossed!