A fine day for a hike. The sorry state of the country. Glimmers of hope. 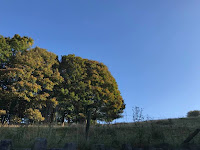 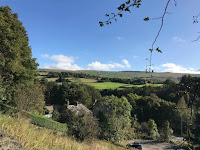 So we took advantage of the fine weather to go on a Diggle Chippy Hike. We had planned this anyway and only heavy rain would have stopped us but the fine day was a bonus. It was rather reduced group today. Granddaughter number two, who likes to go adventuring with the family, was working. The smallest granddaughter, who likes to chat her way up the hill involving me in one of her imagined games, is now in school and won’t be available for hikes until the school holidays. For a while it looked like  being me and Phil and his brother but at the last minute our daughter decided she and the smallest member of the family would join us.

So off we went, up the hill and down again into Diggle, to eat fish and chips by the duckpond. 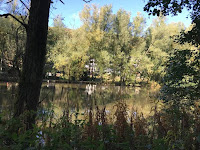 The ducks were out in force, balancing on an old telegraph pole in the duckpond. 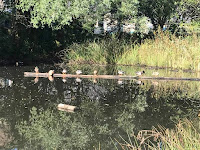 A good time was had by all. and we headed home for coffee.

We got back to find the news that the MP David Amess had been stabbed while doing a surgery in his constituency. Later still came the news that he had died of his wounds. And I wondered at the kind of world, indeed the kind of country, we are living in. I don’t yet know what provoked this attack but it seems that we are becoming a more violent society, more intolerant of all sorts of things.

TV presenter and animal rights activist Chris Packham has been threatened because of his views. Last week, two men in balaclavas drove a Land Rover up to the gates leading to his house and set light to it, causing an explosion and a fire that inflicted thousands of pounds worth of damage. He is known to be opposed to hunting and the illegal persecution of birds of prey but surely he is entitled to hold and express those opinions without being intimidated. And without threats against his wife and children being made.

Philosophy professor Kathleen stock at the University of Sussex has expressed views about transgender people which offend transgender activists and there have been protests calling for her to be sacked. Political leaders don’t seem to have agreed with these calls but neither have they stood up for her right to express those views and still keep her job. When did it become impossible to discuss ideas without provoking extreme reactions? And surely universities are precisely the places where ideas should be discussed calmly and openly!

However, just when I was beginning to lose faith in humanity, I came across this short piece by Adrian Chiles, on the subject of the kindness of strangers:

“As simple unexpected acts of kindness go, this one will take some beating. I was on a train from London to Plymouth last Friday afternoon, on my way to a reunion of some university friends, among them people I’d not clapped eyes on for more than 30 years. Oddly, I found myself getting nervous about it, feeling almost as frightened as a fresher at the prospect of making friends again with old friends. And when I get nervous, I get tired. I have this much in common with the footballing great, Gordon Strachan, who tells me that when he was nervous before games, he couldn’t stop himself from yawning uncontrollably. This greatly annoyed his managers, not least Sir Alex Ferguson.

I tried to lean my head on the window but the gap between the seat and the window was too big, making it most uncomfortable. After a bit of wriggling, I felt something soft being pushed into the gap. It was a rolled-up pink woolly jumper from the woman behind, for me to use as a pillow. Being prone to a bit of a slobber while snoozing, I tried to refuse but she insisted. I slept very soundly, thinking what a wonderful species humankind can be.

When I woke up, I was quite unable to find words to adequately convey my gratitude. The sentences I composed in my head all felt a bit cloying. In the end, I just said thank you several times and left it at that, which still doesn’t feel enough. So, to the woman in the red dress and slobbered-on pink jumper who alighted at Totnes on Friday, I thank you again, most sincerely. And please post the garment to the Guardian so I can get it washed for you.”