Running in the rain. Morning routines. And Montalbano.

At various points in the night I woke to hear rain on the skylight windows. Then finally my alarm rang. I could still hear the rain. I snoozed the alarm. And again. And again. The rain was still there, still noisy. I had more or less decided that there was no way I was going running on the rain. 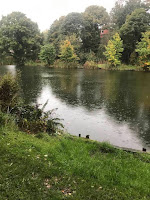 And then I got up and looked out of the window. It didn’t look as bad as it sounded. So I donned my running gear, put a waterproof on top and off I went. We’re lucky; even in the rain our bit of England looks good. There was a severe shortage of dog-walkers out and about though. Where were all the usual people? Were they waiting for the day to improve. There is little chance of that. Apart from a brief moment at around 4.00pm, my weather app forecasts between a 60% and an 80% chance of rain all day. So it goes!

There’s definitely something to be said for being up (reasonably) early in the morning, even though it gets harder as the days get shorter; as the sun rises later each morning, getting up with the dawn becomes a different proposition. But even if it means getting up in the semi-dark, it does make you feel more productive somehow. Not that I ever plan to go running in the dark. Journalist Emma Beddington was writing about experimenting with different early morning routines. It’s amazing how many famous people have strange, almost ritualistic, early morning routines, many of which she tried out. Why does Jennifer Aniston want or need to get up at 4.00 am? What exactly is the point of Victoria Beckham drinking apple vinegar? And so many of them seem to drink weird and strange smoothies for breakfast - broccoli is definitely not a breakfast food and should not be made into a smoothie!

But maybe my own routine is no less odd: get up and go for a run (sometimes taking in a quick trip to the local coop for some essential food item we’ve run out of), back home for a shower, have a leisurely breakfast (no weird smoothies, though), do a bit of houseworky stuff, write my blog and then, goodness me! it’s time for the World at One on the the radio along with a cup,of freshly brewed coffee! The rest of the day follows no routine at all!

Last week I spotted a news item about the publication, at last, of the final Montalbano novel by Andrea Camilleri. He wrote it about 5 years ago and locked it away to be published only after his death, which was in 2019. He didn’t want anyone deciding it would be a good idea to cash in on the success of the TV series based on the books by writing “further adventures”. So he decided to kill off his detective in one final adventure. Will it stop some enterprising person having a go at extra adventures anyway? We shall see.

In our zoom Italian class yesterday, a friend of mine revealed that she is now the proud possessor of this last book, both in Italian (with quite a bit of Sicilian dialect in there) and in the English translation. She’s reading them simultaneously. She is a very devoted Montalbano fan and got very excited when we went on a trip to Sicily and visited all sorts of Montalbano places. That was the occasion when we never quite managed to coincide with the film crew making the next series, much to her chagrin. But all being well, touching wood and crossing fingers and all the other superstitious actions we indulge in, our return trip to Sicily, originally planned for 2019 and messed about by Covid, looks as though it should take place next May. Perhaps I’ll buy the Camilleri book while we’re there.