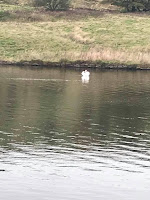 The swans were back on the millpond this morning. There were four of them.

Have the original two brought some mates to visit the local beauty spot? Or are the extra two their this year’s offspring?

Either way, it was nice to see them again. 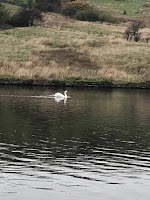 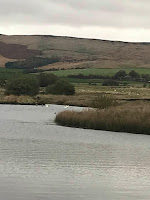 Autumn was looking fine on the path through the trees as well. 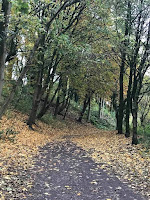 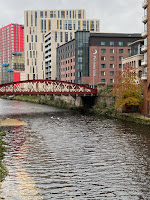 Our daughter has had a mini city break, two days in a hotel in central Manchester with her almost-in-laws, her partners parents. Personally I might have chosen a different city but I suppose for the almost-in-laws Manchester made a change. And it’s possible that her partner had to pop into the office while he was there. 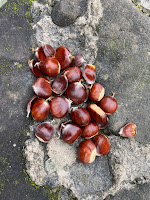 Her little daughter collected chestnuts somewhere this morning - chestnuts in central Manchester? My daughter assures me they are not conkers. Someone else collecting told her they are roasting chestnuts. Well, it’s that time of year. When we get to Figueira da Foz tomorrow there will be chestnut sellers on the street corners.

Almost fifteen years ago now I accompanied a group of A-Level Spanish students to La Coruña in Galicia at this time of year. We arrived in time to take part in the “Magosto”, which is the Galician name for a “castañada” or chestnut festival. Most of my students, Salford citizens, had never tasted a chestnut and were surprised to be given paper cones of roasted chestnuts to eat. For them chestnuts were conkers, to be strung a string ready to do battle with other people’s conkers. The only purpose of roasting them would be to harden them up and increase ypur chances of smashing your friends’ conkers.

The chestnut festival is all over the north of Spain. After all, they love having food based fiestas. And until potatoes arrived from the “New World” back in the 16th century, chestnuts were an important part of the diet for the north of Spain. The fiesta is called “Magosta” in Cantabria, “Amagüestu” in Asturias - the name similarity is obvious - but it’s “Gaztaninerre” in the Basque Country where, of course, they have a completely unrelated language all their own, quite different from everywhere else in Spain.

According to Wikipedia, “Each region in northern Spain has its own unique twist on the castañada festival. In the Galician town of Ribadeo, for example, the magosto festival is celebrated in the market square where locals and visitors sample roast chestnuts, meat or fish pies and wine. The Parador Ribadeo is just two minutes from the town centre.

During magosto, revellers also prepare the traditional Galician fire drink, known as queimada. A special spirit flavoured with herbs or coffee, queimada is typically brewed while a spell is recited, then set aflame.”

I have experienced “queimada”, complete with rollerskating dancers in fancy costumes, and I have to say that it is rather overrated. However, a nice “licor de hierbas” is a different matter, and even better is a nice “licor de café”.

Hmm! I wonder what level of alcohol tax Mr Sunak would put on those two drinks.