What season is it? Crisis? Christmas? Food matters.

Today feels as though we have skipped autumn and moved straight on into winter. Okay, I exaggerate. It’s a bit cold, more than a bit wet and windy, and extremely dull. I ran round the village this morning in light rain. It was reasonably dry when I set off but the rain, which had been falling on and off for most of the night I think, decided to return.

And now it’s just grey. At least yesterday managed to have some bright spots. It started off moderately damp, which was in itself a big improvement. It had rained so hard in the night that I swear half the topsoil from Lark Hill had been washed down into the main road. No wonder the path up to the top of the hill is so bad, with so many exposed stones that you really have to watch where you are putting your feet.

The River Tame as it passes through the village has filled up again. And we appear to have a small new waterfall along the path that goes past the millponds. 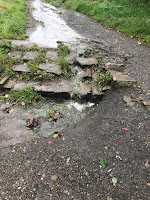 And the stepping stones in Uppermill were underwater again. 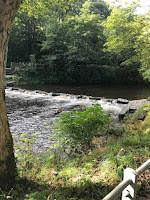 However, we managed to walk to Uppermill yesterday without being rained on. Phil had an appointment with his barber and I met our daughter and the small people at the library. It’s the first time I’ve been to the library in ages, probably since the whole pandemic business started. My daughter had children’s books from before lockdown to return. It’s a good job they don’t charge fines for overdue children’s books.

The radio news has just told me that the petrol crisis is getting better in the north of the country but worsening in the London area. There are still stories of Christmas doom and gloom going around. The pig farming problem - too many pigs and not enough transport to get them to abattoirs - means there might not be enough pigs in blankets to go round. I think we can probably manage without little sausages wrapped in bacon although my middle granddaughter might complain. The doom and gloom merchants still predict a shortage of turkeys, another thing we can manage without. In recent years we have found our turkey disappointing and last year opted for roast chicken instead.

There seems to be a difference opinion about the lorry driver problem. Some news media tell us it’s a Europe wide problem but other sources assure me they have no problems in France and Germany. Who to believe? I might think it is just the UK sliding inexorably down the plughole but according to this article the whole world economy is at risk of disappearing down that same plughole.

According to this article the food we eat is still seen by some as an indicator of class in this country. The writer suggested we could have W (working class) and non-W food items. Things that have been identified as being markers of middle-classdom include quinoa, polenta, sun-dried tomatoes, coffee, loose-leaf tea, coriander seeds, gnocchi, kidneys, goji berries, hummus, falafel, lentils, croissants, muesli, wine, tofu, soy milk, oat milk, almond milk, avocados – and indeed the act of growing your own food. I’m just surprised the list doesn’t include kefir.

Meanwhile, I hear that doctors in Lithuania have removed more than a kilogram of nails and screws from the stomach of a man who started swallowing metallic objects after quitting alcohol. No explanation was given as to why he started eating nails. Perhaps he felt something was lacking from his diet but clearly his body could cope and he was admitted to hospital with sever stomach pain. It takes all sorts.