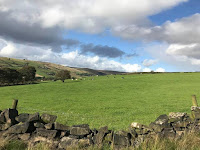 Yesterday was a blustery sort of day, the wind blowing clouds over and then blowing them away again to leave blue sky for a while. There were rainy sessions in between times. We decided to take a risk on, or take advantage of, one of the blue sky periods to go for a walk up Lark Hill. Stomping up the hill once a week is good for the soul! Not to mention good for our general fitness. But the views are always spectacular and in recent weeks we have had some very interesting cloud formations up at the top. 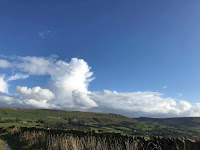 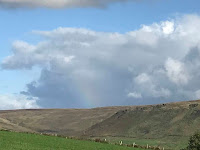 As we walked and talked our way up the steepest part, we commented on how degraded the track has become. A few years ago we walked up there with our daughter pushing her smallest child in a baby buggy. Looking further back, I remember when the Whitsuntide festivities around here included The Beer Walk. It was organised by the Round Table. Groups paid a sum to the organisers, which made you an official participant and entitled you to a half pint at almost all the pubs along the route. The strenuous walk from one pub to the next prevented excessive drunkenness. Or so they said. Participants dressed up in fancy dress and collected money for their chosen cause from spectators along the route. And so there were giant babies in rickety prams, Roman charioteers, makeshift bogies disguised as racing cars - all kinds of wheeled affairs that were hauled up Lark Hill.

You simply couldn’t do it nowadays. The weather has taken its toll, with heavy rain washing away much of the soil and gravel from between the bigger stones of the track. And in some places it looks as though huge farm vehicles have churned up the surface, loosening more stuff to be washed down in the next torrential downpour. There are great potholes to be circumvented. No, we decided, you wouldn’t want to push a baby buggy up or down Lark Hill.

So imagine our surprise when we saw a car making its way down the track. Just an ordinary family saloon car. Not a 4x4 or any kind of off-road vehicle. We were, as they say, gobsmacked! The car had paused in its descent, whether to let us go past or for the driver to survey the track ahead I do not know. We went to chat with the driver, helpfully pointing out that the road ahead of him was only going to get worse, that I wouldn’t drive down there if you paid me, not even a shedload of money, and that he might be better trying to turn round and go back. Mind you, driving back up the distance he had come would be no easy matter.

The driver was clearly not a local. His accent was American but we suspected that he was probably not American, just a foreigner who had learnt his English from an American teacher or language learning package. Rather puzzled at our advice, he thanked us but said he would continue and see how it went. And we went our separate ways. We’ll almost certainly never know what became of him.

The thing is that at the top of the hill there is a perfectly good road. Not a major road by any means, but properly surfaced. Driving along there in either direction is perfectly fine. It goes from a point in Dobcross to a junction with the A62. For some reason that driver must have turned off there and set off down what might look like a farm track but which deteriorates rapidly, after about 50 metres I would say. Maybe he was following satnav, which can be misleading. 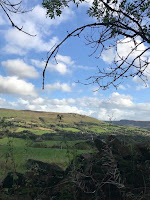 As for us, we continued along another bit of track only fit for off road vehicles until we got closer to Dobcross village centre, admiring the view over the valley and, in Phil’s case, attacking a few nettle patches en route. After that it was pretty much all down hill. We admired the sunflowers, surprisingly not too battered by the wind, and the bits of autumn colour. And we arrived home just as the rain started.

Today’s weather looks to be offering more of the same.