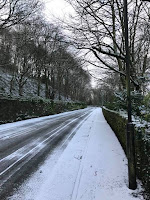 I took one look at the snow-covered road this morning and decided that my bike was not going out today, or rather, I was not going anywhere on my bike. I have an aversion to slipping and sliding on two wheels, even wheels that are meant to deal with quite rough terrain. So I got all wrapped up and set off to walk to Uppermill. The market is still not operational but the bakery and the greengrocery are open. And I got some fine snowy photos along the way. 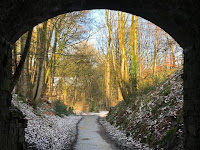 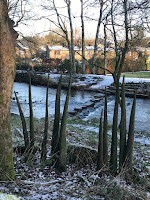 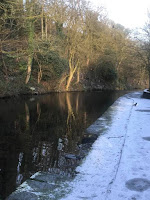 There were not a lot of shoppers out and about but I saw a surprising number of runners, mostly young men but one or two old enough to know better, running in shorts! In shorts!! It’s cold out there! It must be a macho showing off thing. I saw one who seemed to have very pink legs but then I realised he had running joggers that were navy down to the knee and then pink below the knee. Very odd!

According to this article, it looks as though there was an increase in numbers of infections around the time of our second lockdown in November because the plan was leaked to the press a week before the lockdown was officially announced. As a result of the leak loads of people rushed out to spend as much time as possible in the pub or eating put with friends. A kind of “let’s party now for tomorrow we die” attitude, which unfortunately will have proved to be true for some of them.

I am reminded of when I used to advise students who were writing their personal statements to go on their UCAS form, applying for university. Some of them wanted to included “socialising” in their hobbies and leisure activities. We tutors always advised against it but maybe it really is a national hobby!

Despite the lockdown I am still seeing adverts for holidays and for MacDonalds, which ends up proudly declaring “We are open”. Well, I suppose that if you can go to their drive-through places, then technically they are open. This explains the resurgence of MacDo litter along the side of the road.

We tend to think of MacDonalds and Burger Ming and the like as a modern invention. And yet, underneath the ashes of Pompeii they have unearthed an early example of a fast food restaurant - Roman-style.

Today the Magi should have brought presents in Spain and La Befana in Italy. And then Christmas is over, apart from some orthodox Christians perhaps. Time to take down the cards - maybe saving the best so that I can cut them up and consider making my own cards next time. And time to dismantle the little tree, stowing away the lights and the angels in a safe place. And the tree can go in the garden to see if it survives until next  Christmas comes along, hopefully a bigger celebration.