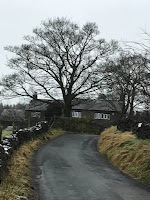 Today I have run through fog, mini-hailstones and snow. It wasn’t proper snow though, not like the snow of yesteryear.

This was thin and watery stuff and wasn’t really sticking, even though it made for pretty photos of woodland paths. 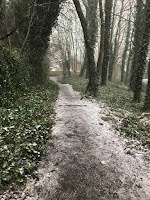 Oddly, this year friends from more southerly bits of Manchester are being hit by more snow than we are. Not that I am complaining! Far from it! 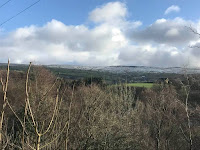 Yesterday we went on a bit of a family adventure, “accidentally” meeting my brother in-law and then my daughter and small offspring on the road to Diggle chippy.

Organising adventures is a bit problematical at the moment with so many rules and regulations about who can meet and what you can do outdoors. 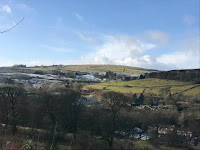 Here, by the way, is a link to a short article about children’s writers Julia Donaldson and Axel Scheffer taking a bit of a sideways  covid look at some of their own illustrations and stories. 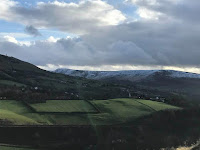 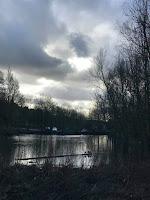 We were not the only people to have chosen to sit at the picnic tables by the duckpond with put fish and chips. There was a group leaving as we arrived and another came along while we were there. It may be because it was the first fine, well moderately fine, day for quite some time. The duckpond was looking very picturesque but the area round the picnic tables was a veritable quagmire! Hardly surprising with so much water falling from the sky!

The house across the road from ours has been pumping out their cellar. They say it’s not the first time it has happened and they have their own pump. Even though they say there is nothing but junk in the cellar it can’t be good for the building itself if the cellar floods occasionally. Fortunately we have never had problems of that kind. And now I am rapidly crossing my fingers, touching wood and trying to think of anything else I am supposed to do to turn away misfortune.

On the television and radio news they have talked at length about how the old drainage systems are not coping with the run-off water from the hills during the heavy rain we have been experiencing. This is more of a problem apparently than rivers bursting their banks. No mention is made, however, of the houses built on floodplains and the gardens that have been covered with flagstones and tarmac to provide parking places for cars, all covering what used to be areas that could absorb some of the run-off water. All the prettily paved patios are contributing to the problem!

Thinking of environmental problems and climate change, here’s a little something I found I don’t remember where, commenting on reactions to the new POTUS and his policies:-

“So now the craziness is being taken up by others. Trump supporter Ted Cruz made an early start, writing: “By rejoining the Paris Climate Change Agreement, Biden has proved he cares more about the citizens of Paris than those of Pittsburgh.” This is quite sweet, suggesting he thinks the Paris Climate Change Agreement is about climate change in Paris.”