Misery out of doors and all round. Food parcels. And a bit of linguistic light relief!

The radio weather-lady has just told me it’s been a wet and miserable morning out there today. Well, yes! I can vouch for that! My ride to Uppermill and back was very soggy. And cold! Added to that, the stretch of path in  front of the old burnt-out mill building, the approach to the Donkey Line, was still like an ice rink. Fortunately the rest of my ride was not so slippery, just wet.

The market was sadly depleted: only the fish-man and the fruit-and-veg-man. I didn’t expect to see the man who sells slippers - not an essential item - or the plants-and-flowers-man but I was surprised not to see the cheese-and-biscuit-lady. Fingers crossed she has not succumbed to the virus!

Food is in the news. Or, more specifically, food parcels.

There’s a video from morning television going round on social media. It shows Piers Morgan embarrassing (oops! sorry! I mean interviewing) the health secretary about free school meals. After listening to a lot of bluster and governmental self-congratulation about getting meals out to children, Piers Morgan pressed the health secretary with a question along the lines of: “Given how glad you are now, do you regret voting against it in the first place?”

All the health secretary would say was: “I am very glad it has been resolved.”

It’s not often I enjoy listening to Piers Morgan but this was quite pleasing!

Photos abound on social media of what seems to be being offered as a free schools meals package.

This sort of thing is bad enough! 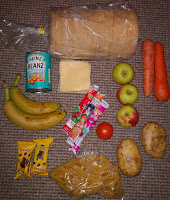 But when you see it in this form, it’s even worse! 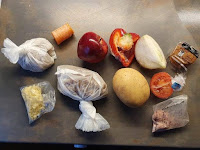 There was an assistant head teacher on the news last night telling how he goes to the supermarket each day to supplement the free meals his pupils receive.

There are parents going hungry, not eating because they want their children to eat. Somebody in their wisdom says that money should not be given directly to families in need. Great heavens! Who knows what they might choose to spend it on. So the disadvantaged needy are robbed of what dignity is left to them as they receive the message: “not only can you not afford to feed your family but you can’t be trusted to choose what to feed them!”

We’re back to the days of believing the working class did not beed bathrooms as they would only keep coal in the bath tub!

But it appears that the Prime Minister has phoned Marcus Rashford. So that’s all right! Policy making by young football players seems to work.

And I feel slightly guilty about buying fancy cheese and olives and semi-dried tomatoes from the delicatessen!

We do seem to be in a bit of a mess. However, our bit of Greater Manchester has gone from highest number of cases of the virus in the country to bottom of the table for Greater Manchester. There is some speculation about how this has come about. Is less testing taking place here? Are people afraid to be tested in case they test positive and have to stop working for a couple of weeks? Or are we all really good at sticking to the Covid rules? As with everything else concerning this virus, it remains a mystery.

And this morning I read that researchers are concerned that virus mutations detected in South Africa, Brazil and Japan may be even more dangerous than the one we have here in the UK. In Brazil it seems they have had at least one case of someone who had recovered from Covid19 and then went on to catch the new mutation! Frightening stuff!

That’s enough doom and gloom and misery! Here is a bit of linguistic stuff that has come to,my attention:-

Hiking - "I don't like either the word or the thing. People ought to saunter in the mountains - not hike! Do you know the origin of that word 'saunter?' It's a beautiful word. Away back in the Middle Ages people used to go on pilgrimages to the Holy Land, and when people in the villages through which they passed asked where they were going, they would reply, 'A la sainte terre,' 'To the Holy Land.' And so they became known as sainte-terre-ers or saunterers. Now these mountains are our Holy Land, and we ought to saunter through them reverently, not 'hike' through them."