Adventures in the mud. Repairs. Careless (or care-free) dog-owners. 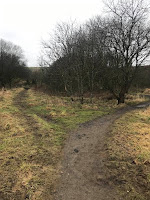 Yesterday we did in the end go for a walk to see the ducks in the millpond. In the event, they were mostly geese but the same principle applied : throw bread as far as possible and watch them scuttle for it. As we set off to follow the path past the second millpond, the four-year-old asked if we could “meet up”. What she meant was that at the point where path forks, her mother should go right with the baby buggy along the lower path passing the millpond, and she and I should go left on the upper path eventually looking down on the millpond. We would then meet up where the paths converge.

An adventure! A good idea! Which rapidly turned into a mud idea! The top path was very soggy, very muddy and clearly much walked, probably from the times when the lower path has flooded. So we had to sing the mud song:

Down to the hollow,

And there we shall wallow

She knows all the words and sings it with much expression. It took our  minds off the squelchiness underfoot. 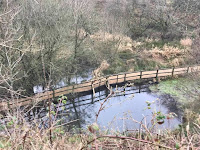 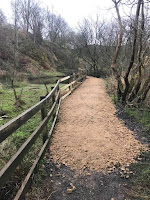 From the top we could see how the lower path had been very recently resurfaced. In fact, a chap with a roller was still busy. The recently storm-produced hollows have been filled in.

I noticed this morning that the broken fence has been mended too. All good! 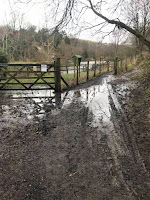 However, they have not done anything about the huge puddle at the point where the paths re-converge. I suppose you can’t have everything.

Today is much colder and windier. My little Christmas tree, which isn’t really a Christmas tree but some other kind of pot-grown shrub masquerading as a Christmas tree, had been blown over - again!! - even in its quite sheltered spot in the garden. I had to go and rescue it and try to wedge large stones around its pot. And now a sleety rain is trying to fall. So it goes.

On our various sorties for exercise we have noticed increasing amounts of dogdirt on the pavements. A serious walking hazard! People seem to have grown careless about picking up the poo! Now I read that this is not just a local problem but a nationwide one. More people have acquired dogs during lockdown - for company, as a way of making themselves go out for a daily walk, as a project to see how good they are at dog-training? - and those who already owned dogs are perhaps taking them out more frequently for walks rather than just letting them run about and poo in the garden. But many of these dog owners, new or veteran, seem unaware of the existence of poo bags, or they leave said poo bags at the roadside or hanging from trees. A strange thing to do!

There is even a website, the dogfoul.org website, run by someone called Andy Coleman (slogan, odd as it is: “We watch. You pay.”) who monitors reports of dogmess. He says,  “There’s so much dog poo this year. It’s gone up and up and up.”

Coleman, who has a Google alert set up for “dog poo”, said the number of reports had been consistently high recently. “There were five articles today alone,” he said. “I don’t think I’ve ever seen that many before.”

I suppose it’s a hobby of sorts. Something to do in lockdown!

We are still waiting for our invitation to be vaccinated. A friend of mine says she cried with joy when she had her first dose. I don’t think I would go quite that far but I understand her feelings of relief!