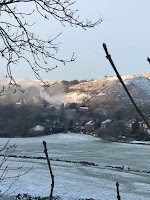 It’s been a lovely sunny day but very cold. There was ice on the millponds first thing but remarkably few slippy places on the pavements. 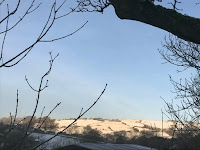 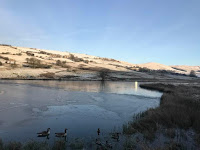 The advantage of keeping hopeless Gavin on is that it distracts from how hopeless I am. He's wittering on now about how exams are on. Or off. Bit like me saying one day schools are safe and the next that they are vectors of infection.

“Lo, look where Trump appears in all his pomp

To play the Samson, pulling down pillars

To put up his power and gloried state."

Note how Shakespeare used alliteration of 'p' to express contempt in an explosive way. Note his  pun on 'state'. Remember these for your GCSE please.”

It’s good to know that Covid has not slowed Mr Rosen down too much. I was reading an interview with Marianne Faithfull, who says she has huge memory problems, not to mention breathing problems, in the aftermath of three weeks hospitalisation with the virus and then further recovery at home.

Bring on the vaccination, please!

I suppose things could be worse. Here’s a link to an article about a French woman who, because of some kind of administrative problems in a legal case, was declared officially dead and has been having immense problems proving to her bank, her doctor, all sorts of people, that she is in fact really alive and kicking. It sounds like the stuff of nightmares.

Presumably, indeed hopefully, she can reinstate all her records. Can Priti Patel do the same with the 150,000 police records that are reported to have gone missing? Hmm!

It’s the 21st century and yet there is a shanty town only 12 kilometres from the centre of Madrid which is suffering from electricity cuts, water shortages, the after-effects of Storm Filomena and, of course, a pandemic!

It’s the 21st century and yet we have children going hungry in the UK.

It’s the 21st century and yet we have a jingoistic Rees-Mogg blathering on about how our fish are now British fish and ‘better and happier for it”. How does he know they are happier? Has he done a fishy survey? How can you judge the happiness of a fish? And can they be said to be happy if they end up rotting because they cannot be transported anywhere?

I am still waiting for the great stories of how Brexit has benefitted lots of ordinary people. At present we seem to be getting lots of stories about the problems. And governmental response seems to be largely waffle about “teething problems” and how things will get better. It sounds suspiciously like jam tomorrow, which you can’t put in today’s toast, unfortunately. Oh, my goodness! I am talking in metaphors! I must be hearing too much Boris Johnson.

Okay! Let’s get back into positive vein. Here’s a link to a story about painted stones.

I first came upon painted pebbles a couple of years ago in a park with my granddaughter, my son’s child. She told me solemnly, as five year-olds can, that this was painted and hidden for people, especially children, to find. Our job was to hide it again in a new place. Which we duly did. Diring the first lockdown painted stones popped up everywhere. Now some people are setting about making them into a permanent monument. Well done!