Well, Jo Biden seemed to get himself inaugurated without untoward incident yesterday.

This may have been in part because the outgoing President Trump lured his supporters away to his leaving party. Instead of politely and quietly going to Biden’s inauguration he flew off to make a speech to his supporters about how much he had done and how he loved them and thanked them and how he would be back one day. Once again it was all about The Donald. He foretold success for his successor, implying that this was largely because his administration had done so much to make great things possible.

What will he do now? Watch his space seems to be the answer.

But at least they got Biden inaugurated in front of a massive collection of flags. Lady Gaga sang. Jennifer Lopez sang. Even a Republican country singer I’ve never heard of, Garth Brooks, sang. Then apparently there was a Celebrating America TV special after the inauguration, hosted by Tom Hanks and featuring Justin Timberlake, Foo Fighters, Demi Lovato, Jon Bon Jovi, John Legend and the real Bruce Springsteen.

In the James Taylor Appreciation Group on Facebook some followers expressed surprise that they didn’t see their hero James on the concert as he was supposed to be there. It was all right though; he performed on Sunday evening apparently.

It’s all part of pointing out that the Democrats can get the best singers to perform for them while Trump failed to get even a Springsteen tribute band to his inauguration. And Elton John was said to be due to sing for him but it seems nobody told Elton about it beforehand and he refused to go as well. The media circus goes on and on and all the bits of it are interconnected. 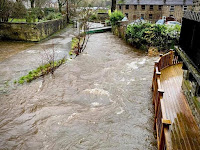 While all this was going on across the pond, the UK was being drenched by Storm Christophe. It just kept on raining and raining. My daughter sent us a photo of the River Tame overflowing its banks just by the bridge in Delph village. Then on the news came notice of people being evacuated from their homes in Didsbury as the River Mersey was about to burst its banks too - and in a more spectacular way no doubt than the smaller River Tame.

My daughter sent photos of snow outside her house in Tameside.

My granddaughter opened her attic bedroom window to look at the snow in Mossley and succeeded in getting snow on her bed! 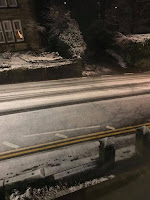 Winter, it seems, is back with a vengeance. When I went to bed the road was white.

This morning it’s clear again but there is snow lying on gardens and rooftops. It’s neither raining nor snowing at the moment, 8.30 am, but more of both are forecast for later. We shall see.

I was up bright and early - well, early if not bright. We had ordered some wine, as you do. Delivery was promised today between 7.00am and 9.00am so someone had to be up to accept it. Our delivery instructions had said, “If no answer at the door, leave with the neighbour”, but you can’t have them knocking at your neighbour’s door at 7.00 in the morning.  There really should be a law against deliveries being made before 8.00am. The delivery was eventually made at about 7.45. And the neighbour was up because I saw him heading out to his works van with a cup of coffee in his hand.