Our daughter is getting ready to start a new term at the primary school where she works. However she is half expecting to discover, maybe at some late stage tomorrow, that she should be preparing to teach online instead. It has already been decided that primary schools in London will stay closed. And the National Education Union is calling on the government to keep all primary schools close across the whole country.

Dr Mary Bousted, the joint general secretary of the NEU, said the government needed to close schools in England before infection rates got out of control. “If you allow the conditions to get so bad in the end you’ll be closing schools for longer.

“I find the government’s recklessness in this regard, both with educational professionals’ health, but also with community health, and the questions increasingly around children’s health, inexplicable.”

I don’t envy Gavin Williamson’s position at all. It can’t be easy deciding what to do for the best for the country’s children. This does not mean I like the man. Far from it. He should have consulted teachers more closely and listened to their views more carefully. Maybe he should have stood up for teachers, pointing out to all the media teacher-bashers that the teachers have all been working their socks off, to quote our prime minister when he took office, to keep things going.

But now maybe teachers can be asked to take on one more role and learn how to administer covid tests to their pupils!

And it doesn’t look as though the overall situation is going to get any better in a hurry. Here’s a link to a man-who- knows talking about the risks of the new strain of the virus and, more importantly, about the need not to grow complacent:- 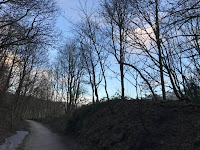 So rather than being complacent, I guess we need to be extra vigilant over the next few weeks. Just to rub it in, today is a lovely day - all right, it’s very cold but it’s crisp and bright - perfect for meeting friends and going for a long walk. I’ve been along a very frozen Donkey Line first thing and returned home to this message:-

I really had thought we could go for a walk with you this weekend ... but now we’re not allowed !!!

Hope you and your loved ones are all well ...

Meanwhile, the subdued celebrations and congratulations on the Brexit deal continue, with news reports of how smoothly everything went at ferry ports yesterday. Just a minute! Wan’t yesterday New Year’s Day? Would you expect the ferry ports to be fairly quiet and therefore problem free on such a day? Or am I being naive?

Meanwhile, my brother-in-law still sends me odd posts and things about the deal, such as this from someone in the Campaign to rejoin the EU :

“Beware! The trade deal is a con. Lying BoJo is not to be trusted! We now have to pay taxes on all EU imports and exports! I’m talking from a recent experience.”

Some people will always try to find a way out of situations they don’t like. Our prime minister’s father, Stanley Johnson, is applying for French citizenship or a French passport on the grounds that his mother was French. Of course, like the people I know who have applied for Irish passports because of Irish forbears, he has that right. If I were the French I would not give him houseroom! A friend sent me something about this from The London Economic:

“Visiting Calais on Friday to inspect how the French port is adjusting post-Brexit, France’s minister for European affairs Clement Beaune described the citizenship application as emblematic of enduring British sentiment for Europe.

“If Mr Johnson’s father has a right to French nationality, wants to remain a European citizen and become a French citizen, then we will examine that,” he said.

“To me, this is a wink, or a sign, that lots of British people, in different ways, still love Europe.”

I beg to differ with Monsieur Beaune. This is not a “wink” or a “sign” of anything other than a rich bloke trying to make sure that he can continue to be able to do what he has always done!

It was interesting to read this article the other day about how other countries see our Brexit.

“Boris Johnson has always been seen as a bit of a gambler, displaying a certain … flexibility with the truth. But observing him him as prime minister has only made that worse,” said Nicolai von Ondarza, of the German Institute for International and Security Affairs.

Nikolaus Blome, in Der Spiegel said there was “absolutely nothing good about Brexit … which would never have happened had Conservative politicians not, to a quite unprecedented degree, deceived and lied to their people”. He wasn’t gentle on the British media either, saying they were complicit, constantly trampling on fairness and facts”, leaving Britain “captured by gambling liars, frivolous clowns and their paid cheerleaders. They have destroyed my Europe, to which the UK belonged as much as France or Germany”

But the quote I like best is this one:

“‘Take back control,’ Johnson lied to his citizens. But all the British government will finally have achieved is to have taken back control of a little shovel and a little sand castle.”