Out and about on the semi-slippery surfaces. News that slips through the cracks. Brexit opinions. Making a comeback? 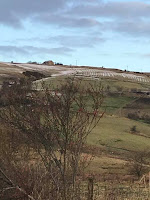 Today began fine and bright. I went out for a run as usual, prepared to change to a careful walk if necessary. But whereas yesterday it seemed to have semi-thawed and then refrozen, today the pavements were white but not slippery. A fine snow must have fallen at some time but it was still crunchy. Not a problem, although on the one steepish downslope on my route I did go down to a careful walk, just in case. The brightness has come and gone over the morning, but so far a good day on the whole.

We set of for a walk together in one of the sunny periods, hoping to get some vitamin D. The sun didn’t last long, as expected. So it goes.

The other evening I was about to go off to bed, leaving Phil listening to the television news, when an item popped up about yet another black man being shot by a policeman in the USA. More chaos! But it sort of slipped out of the news. Maybe there was too much going on: New Year, Brexit deal, Covid rampaging everywhere. Maybe I just watched the wring news channels. Maybe we have all grown used to hearing such stories.

I had meant to comment on it earlier but other things came up. So yesterday or the day before I went in search of details. It turns out that it was on the 22nd of December - so long ago now - in Columbus, Ohio. Police were called to a routine complaint about noise on a housing estate late at night. As the police approached, a man came out of a garage next to a house, mobile phone in one hand and the other hand in his pocket. And the policeman shot him!

More fuss seems to have been made about the fact that the policeman did not have his body-camera switched on at the start of the incident and only after that the fact the 47 year old man received no first aid assistance for a good five minutes. By the time help was given and paramedics arrived it was too late. Another black man wearing a Black Lives Matter t-shirt had died.

The policeman concerned has possibly lost his job, or maybe just been suspended while they investigate. Why is he not being charged with murder? Why are US police not trained to shoot to disable?

Looking for information on this event, one of the links gave me the following message:-

451: Unavailable due to legal reasons

We recognize you are attempting to access this website from a country belonging to the European Economic Area (EEA) including the EU which enforces the General Data Protection (GDPR) and therefore access cannot be granted at this time.

Is this one of the downsides of Brexit? A health warning the leave voters did not read?

Talking of Brexit and such, here is a link to George Monbiot, giving us his opinion.

On the radio news I have just heard Jeremy Hunt, erstwhile Health Secretary, telling us that we need to restrict our mingling even further. He advises not even meeting one person from another household even outdoors!

Mr Hunt has been making his presence felt recently. Is he planning a comeback, perhaps as a new leader of the Tory Party? We shall see.