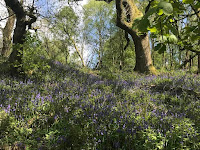 We walked the bluebell woods yesterday afternoon. It was a good day for it.

The bluebells are not quite at peak splendour but they are doing well. 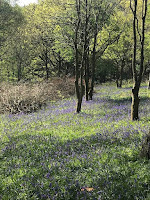 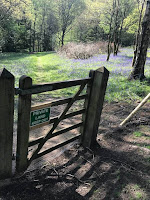 At the point where the path has been fenced in and certain areas enclosed we came upon a new gate with a Private Land notice firmly in place. Someone wants the bluebells for himself.

The more cynical part of me suspects that if the main path were not so well established and sign-posted by the local authority, then access to parts of the wood might have been denied us.

Coincidentally, here’s a link to an article about a bunch of people in Devon who went picnicking on private land in protest, demanding open access to all such open areas. The Duke of Somerset owns much of the areas woodlands, which remain largely off limits to the public as they are used for a pheasant shoot. There is no “right to roam” on such land. So the picnickers were breaking the law, despite the fact that the duke had received public funding for the woodland under the English woodland grant scheme.

Devon locals shouted: “Less room for pheasants! More room for peasants!” as they entered the forbidden territory, which was empty but for a couple of estate managers, who kept a suspicious eye on the protesters. I do like a good rhyming slogan to shout! Even if I don’t really consider myself a peasant.

Still on a protest theme, some time ago I wrote about an old bridge, dating back to Victorian times, in Cumbria. Deemed by the highways people to be unsuitable for today’s traffic, it was “infilled” with very ugly concrete. This struck me at the time as an extremely drastic solution, covering up the quite elegant lower section of the bridge.

Now this article tells us that 795 objections have been received. The government might have to “pause” their plan to infill similar bridges all over the place. If that goes ahead National Highways will be obliged to restore the bridge to its former condition at an estimated cost of £431,000, in addition to the £124,000 it spent on the infilling work. That’s a lot of money to spend on concrete!

An expert says the Musgrave bridge requires only £20,000-worth of pointing repairs to make it safe enough to carry 40-tonne loads. That’s a bit of a difference.

Carry on complaining, say I.