Out and about in the rain for various reasons. Price rises. Exporting asylum seekers.

The rain is back. It woke me several times during the night. By the time I set off for Uppermill market it had stopped, fortunately. I had already decided to walk to Uppermill rather than cycle as we had appointments at the local clinic for vaccination against pneumonia and shingles. I am beginning to feel a little like a pincushion, I have had so many injections in the last couple of years!

So I set off to do the market trip and Phil followed later to meet me at the clinic and then go for a haircut. Busy, busy morning!

En route I snapped a picture of holly in flower. I have long wondered why it is I see holly with berries but never with flowers. So today I have found it! 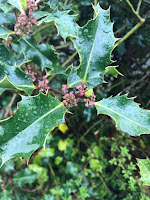 Yesterday came the announcement that BP has made profits $6.2bn in the first three months of this year. This is the result apparently of soaring gas prices. Apologists for BP say that the company will invest a whole lot of money in improving how things work, but the announcement did say “profits” not “money to invest in improvements”. So why are they making lots of money while energy prices are going up for ordinary people who are struggling to make ends meet? 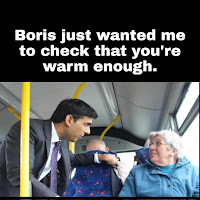 Our Prime Minister appeared on a breakfast TV programme, Good Morning Britain I think. Told about an elderly lady who travelled round for hours on a bus to keep warm as heating her house was too costly, he reminded the interviewer that it was he who introduced free bus passes! Supposedly that made it all okay and made him look like a good guy. It has led to a series of jokes about buses with notices on the side inviting people to “hop on and keep warm”.

Wasn't it Great Tebbitt who said that people without jobs should get on their bikes?  I, of course, introduced bikes to London and it occurs to me that if people are moaning about fuel bills, why don't they got on their bikes to get warm?

In articles about the prospect of asylum seekers being “exported” to Rwanda, I have come across a new verb, “to offshore”, as in “the threat of offshoring will drive some refugees underground”.

And here’s an extract from something written by Diane Abbott

“It was also reported in the media a few days ago that a Home Office whistle blower said that it was now practice to issue visas for refugees from Ukraine, but that one small child would be left off the list of family visas granted. The twin purpose is to allow ministers to boast a high number of visa approvals, but practically allowing only the smallest number of actual arrivals, because families will not leave without the small  child.

We checked our own case work records, and immediately found three other families from Ukraine in exactly the same position. There may be others. This is too much, and too specific to be coincidence.

At the same time, we learn that the Home Office is refusing to deal with any applicants from Afghanistan at all, and has now done so for some time.

It seems that there are strong words of sympathy and support while these conflicts continue, but there is precious little action in terms of support for refugees, some of whom are in desperate straits.”

It seems to me the world is in desperate straits.