Summer is a-coming in - at least according to the trees - but slowly. Permissible food combinations.

Listening to the rain on the skylight windows this morning early, I took the decision to walk to Uppermill market rather than cycle. The rain was not so very heavy that walking would be unpleasant but it was drizzly and wet enough to make cycling messy and rather more dangerous than I like. Somehow wet weather makes motorists more impatient and less observant of other road users. 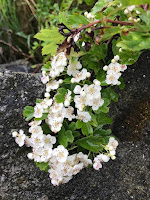 Along the way I snapped pictures of hawthorn blossom, also known as May blossom or possibly just may blossom without the capital letter.  And I thought, as I always do at this time of year of the expression, “don’t cast a clout, ‘til May is out”. Some people interpret this as meaning that you shouldn’t start to wear lighter-weight summer clothes until the May blossom has appeared. Others say it means not until the end of the month of May. 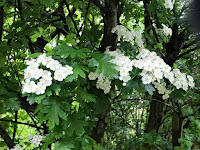 Either way, today’s weather does not encourage the casting of clouts, as a dog-walking lady and I agreed! I must say, however, that we have felt much less need to put the heating on in the last few weeks. And I have not been wearing my warmest sweaters. So we must be inching our way towards summertime! 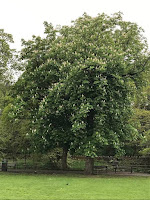 Not only is the hawthorn blossom out all over the place, but some horse chestnut trees are beginning to show off their candles (i.e. blossom) in splendid fashion. 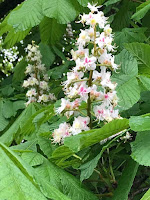 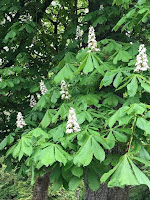 Because of the rather windy and damp weather the cheese and biscuit lady was absent from the market this morning. So was the man who sells slippers, with a side line in vitamins and health supplements. I am jumping to the assumption that it was the weather that put them off. Their stalls are much less substantial that the fruit and veg stall and the fishman, both of which stalls are really extensions of the owners’ vans or trailers.

As I was paying for my fruit and veg I spotted my bus arriving at the stop. I moaned about it to the fruit and veg man who called out to the fishman to ask the bus driver to wait for me. Amazingly, the driver agreed to wait. Cooperation and helpfulness still exist in the world!

So I was able to get home promptly without having to wait another 30 minutes or resign myself to walking with my rucksack full of stuff.  Just in time for a late breakfast. Over breakfast I read Guardian columnist Arwa Mahdawi expressing her disgust at people putting orange juice on their breakfast cereal instead of milk. I must say I agree with her, although I know a few people who make porridge with water rather than milk and even leave muesli to soak overnight in water. Each to their own, I suppose. Orange juice manufacturers like the idea of course and the company Tropicana even produced a cereal specially designed to be consumed with orange juice, launched on May 4th, which big citrus in the US  deemed  National Orange Juice Day. There you go!

Arwa Mahdawi also mentioned macaroni-and-cheese flavoured ice-cream in her list of flavours that should not go together. Goodness! I have enough difficulty with our grandchildren enjoying bubble-gum flavoured ice-lollies, but that is largely because I strongly dislike bubblegum and especially it’s smell. Ms Mahdawi also informed me, by the way, that today is National Eat What You Want Day. Who knew? Not I.

“Observed annually on May 11th, National Eat What You Want Day sets diets aside for a day of indulgence.  It’s about having one day a year of eating with no regrets. Whether you love donuts or fast food, today is your day to gratify without feeling guilty.” So now we all know!

It’s now heading towards midday and the promised “brightening up” that the weathermen assured me of has still not happened yet. We shall see.