Today’s local weather forecast says “Sunny intervals and a moderate breeze”. It doesn’t even have a raindrop symbol indicating rain but on another bit of the page it gives a 25% chance of rain. That percentage diminishes as the day goes on, so maybe we should postpone going for a walk until about 5.00pm. In any case, it’s nice to be able to do that now that the days have grown longer. 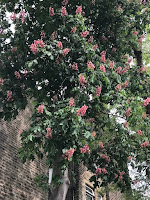 The horse chestnut trees and the hawthorn are nicely in blossom all over the place. In both cases my favourites are the ones with pink blossom, in various shades of pink.

Maybe because they are more unusual than the white blossom they always seem extra spectacular to me.

Here are a couple of local examples. 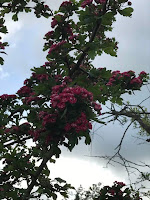 Note the blue sky behind the hawthorn blossom that’s how nice yesterday evening was!

I didn’t consult the weather app,before going out for a run this morning. Instead I listened to the attic skylights: no rain spattering there so I donned my running gear + light weight rain jacket and set off. Half way round my usual route I was caught in a mild downpour, not quite so heavy as some we have had lately but even so - wetting. It stopped after a while and I dried off somewhat. Almost home I stopped to chat to a neighbour. Like me she walks miles most days. Today she had fished out her lightweight raincoat just in case - raincoats and umbrellas work as good insurance policies. This “insurance policy” did not stop the rain starting again as we set the world to rights.

One of the things we talked about was having children, maybe because her nephew has just become a father at the age of 42. She herself has only one son. One was enough for her. “I don’t like pain”, she declared. When she hit forty and her husband suggested they might have a second child she told him the only way would be if he bore the child. That wasn’t going to work! We discussed sizes of families in the Italian class yesterday, most of us feeling that families were growing smaller. My mother was the ninth child of ten. I was the second of four and I went on to have just two: one of each kind. Okay, our daughter went against the trend by having five, but there are three different fathers involved. This seems to be the way of things if you have a number of different partners; each relationship needs a new mini family.

Anyway, my neighbour told me she had been watching a programme about the Radfords, a family with 22 children. Yes, 22 children! I thought the family with ten I knew as a teenager was big enough. They ranged from a twenty year old to a one year old. I had been to school with a couple of them. I remember marvelling at the thought of the mother having spent a good twenty or more years of her life permanently pregnant or just delivered of a child. Mrs Radford clearly beats that record! My neighbour and I speculated on how they afforded so many children, especially as one of the daughters has now begun providing grandchildren. How do you manage to have a house large enough for so many? How do you manage family outings. The family I knew in my youth used to run everyone around in a minibus but the Radfords must need a charabanc or a fleet of minibuses! Maybe they live off child benefit, speculated by neighbour. But I’m pretty sure they have restricted the number of offspring you can claim for.

So I googled them and, among other things and masses of photos I found this:

“How do the Radfords afford to live?

The Radfords support themselves with the proceeds of Noel’s bakery, The Radford Pie company, which is located near their home.

On the website, it says: “We have owned our own lovely bakery since 1999 which is how we manage to provide for (and feed) our huge and expanding family as well as for the local people of Heysham and Morecambe.”

The family have now expanded their business to cater for online orders made from around the UK.

The business is a family affair, with Noel at the helm, and children Chloe and Daniel helping out.

Do they take child benefit?

Noel and Sue famously don’t rely on benefits for their bumper brood, and live off their pie shop for income.

They also revealed they make money from brand partnerships on social media.”

That last sentence says it all for me, along with the fact that my neighbour was able to watch a TV documentary about them. They may well claim to be bakers but really they are a “professional family”. That is their main employment. Forget about the Von Trapp Family Singers and the Jacksons making show business a family affair. In the modern, media-driven world it is possible to earn a living just by being yourself and publicising and marketing yourself to the full.

What a strange world we live in.