There was a blood moon last night apparently. It’s all to do with the moon being a super moon because its orbit brings it close to the earth so it looks bigger and then the sun and moon and earth lining up to give a lunar eclipse, with the moon reflecting sunset colours from all over the place. That’s a very unscientific explanation, by the way. Anyway, the news broadcasts said it would be visible from the UK in the small hours of the  morning, around 4.00 am as the moon set.

Well, that ruled out any chance of our seeing it around here. First of all the cloud had moved in. This always happens whenever there is some celestial phenomenon to observe: meteor showers, the space station passing overhead, planets getting in a line - you name it, indeed just think about it, and the cloud moves in to obscure everything.  Secondly sunset and moonset take place a little earlier for us because there is a blooming great hill in the way. On fine summer evening when it is still light the sun has already disappeared over our somewhat restricted horizon.

Consequently I have no personal photos of the phenomenon. But here is a link to a photo of the blood moon. And here is a photo of the almost full, quite ordinary-coloured moon seen from Hill End Road, a lane near our house when we were out for an evening stroll on Saturday. 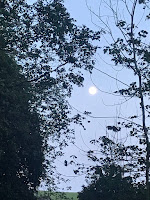 As it happens, I was probably awake at the time the moon was setting early this morning. I woke up and went to the bathroom but there was no point in looking out of the window at anything because the rain was pounding down. It was already raining when I retired for the night and I suspect it kept it up all night. There was a lull in the rainfall when I eventually got up properly and so I decided to risk it and went for a run round the village. I was rather less half way round when it started to drizzle. Good job I put on my waterproof jacket, I thought. Then the rain got harder. A pity I didn’t put my heavy duty raincoat on, I thought.

My light raincoat was soaked through in minutes. My feet were already wet as there was so much water running along the pavements. So there was little point in adapting my route to avoid the path through the wooded area where the puddle always form. Any puddles I was obliged to step in couldn’t really make my feet any wetter than they already were!

The forecast for the rest of the day is pretty poor but for the rest of the  week they promise me “sunny intervals and a light breeze”, with only a 2-3% chance of rain. As I have made tentative arrangements to go for a walk with the eldest granddaughter on Wednesday, no doubt the forecast will change between now and then. We shall see!

Both the oldest granddaughters work mostly from home. It seems to suit them, although I do wonder about the lack of proper work-based social interaction. Some of the powers that be seem to have about-turned on the advisability working from home. We had Jacob Rees Mogg leaving passive-aggressive “Sorry you were out” notes on the unoccupied desks of civil servants who were presumably working from home. Lord Sugar (is he a power?] has called people “lazy gits” for wanting summer working hours and longer weekends. And now the Prime Minister commented on Friday, “My experience of working from home is you spend an awful lot of time walking very slowly to the fridge, hacking off a small piece of cheese, then walking very slowly back to your laptop.” If this is how he spends his time it might explain why he sometimes appears not to know what is going on!

Nazanin Zaghari-Ratcliffe had an interview with Mr Johnson the other day and looked back to the time when he was Foreign Secretary and mistakenly talked about how Nazin Zaghari-Ratcliffe had been in Iran to train journalists, not simply to visit her family there. She told Boris Johnson that for four years she lived in the shadow of that mistaken statement. I seem to remember hearing on news reports that the Prime Minister did not actually apologise for that. After all, truly apologising implies acceptance of responsibility.

Another Tory Prime Minister has just had  her statue erected in her hometown of Grantham, Lincolnshire, on Sunday. Just after it was lowered into place it was pelted with eggs. This despite it being on a 10 foot high plinth and probably behind barriers. The bronze Margaret Thatcher was originally intended for Parliament Square due to fears of a “motivated far-left movement… who may be committed to public activism”. Even dead it seems she needs security protection!