At the market in the rain. Buses. The crazy world.

Today is dreary, damp and draughty - well, windy really but I wanted the alliteration. My weather app says “Light rain and a gentle breeze”. It might well say that, but I decided it was wet and windy enough to dissuade me from cycling to Uppermill this morning. So I donned a waterproof and trudged up the hill to Dobcross and down the other side to Uppermill. The cheese and biscuit lady was not there, I am sorry to say. The other stall holders were joking that Jenny has become a “fair weather trader”. I gather she has difficulty setting up her stall when it’s windy, which is a shame as we miss her oat flip biscuits!

I was in Uppermill by 9.20. A quick run to the hardware shop (for superglue), the coop (for crumpets among other things), the Italian greengrocery (for oranges, grapefruit, yoghurts, apples), the fish man on the market (sea bream fillets - 2 for £8), the veg man  (for carrots, apples - I like to spread my apple buying between suppliers - and strawberries), the deli (for olives, sundried tomatoes and rather nice cheese) and before 10.00 I was waiting for a bus for home.

The 356 bus, which does a scenic route via Diggle and Dobcross) arrived early. I checked he wasn’t planning to stop for his breakfast break for five minutes - this sometimes happens - and decided it was better to get on an actual bus rather that wait for a hypothetical 350 bus which does a quicker route and was due in a few minutes but might be late - that also happens … and far too frequently! So many things to take into account (!) but I was home by 10.20, in time for a latish breakfast.

Incidentally, as the bus was held up at traffic lights in Diggle someone waved her arms at the driver, indicating her wish to get on. “Not a stop!” growled the driver. Now, I know they are not supposed to allow passengers to get on and off between stops (It’s more than my job’s worth!) but I also know that some drivers are flexible about it, especially on that scenic 356 route. Some of the drivers know which passengers to wait for at certain points along the route, making it a friendly service! Besides, I recognised the lady in question and would have enjoyed a catch-up chat with her! 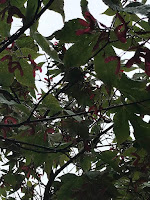 It might have been dull and damp but I still found some colour in one of the local trees, which appears to be preparing for autumn already, even though summer has not got started yet! 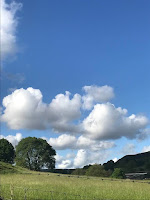 Yesterday we walked out in the late afternoon, admiring cloud formations against the blue sky and exotic yellow blossom on the laburnum trees. 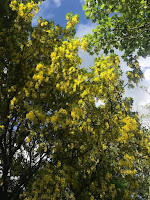 My weather app promises that today will improve later, reducing the chance of rain to only 3%. So maybe we can do the same again today. Already (late morning) the rain appears to have stopped and the cloud has thinned enough to let a little brightness through.

Mayhem continues in the wider world, war in Ukraine pushing out concerns about the environment and climate change. Not to mention concern about Ukrainian refugees pushing out concerns about Afghani and Syrian refugees. And there has been another school shooting in Texas, USA. Those who put their energies into anti-abortion campaigns and protecting the unborn child need to turn their attention to anti-gun matters and protecting the children already in existence. The world is mad!

Meanwhile, here in the UK partygate has raised its head once more - or maybe it’s just never lowered its head, just hid it behind other issues. Sue Gray’s report comes out today, just a day or so after photos of a wine glass wielding Prime Minister were published and Downing Street staffers started revealing facts. Oh boy! My Italian friend says that her friends back in Sicily cannot understand what all the fuss is about. What’s a party with a bit of wine compared with bunga-bunga and major corruption? they ask! Maybe so! And maybe the fuss has all been going on far too long! But it’s not so much the parties - bad as they were - as the lying and obfuscation! Good grief! We’re British! We don’t do such things!